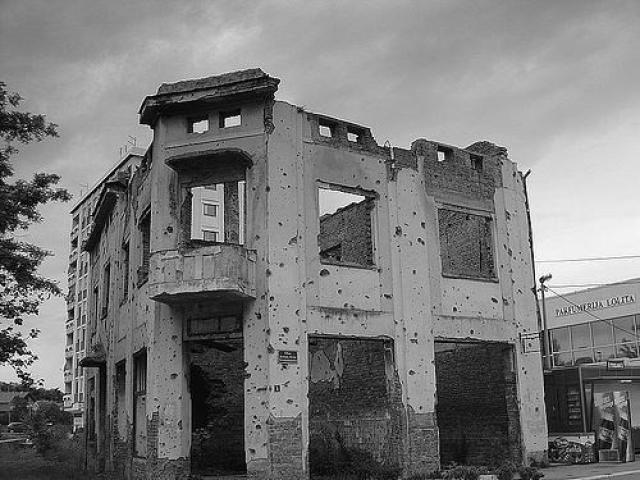 On the 4th of August 1995 the largest European land offensive since World War II started in Central Croatia, in the area of Krajina. Until then Serbian Croats were the majority population there, but a few days later there were no Serbian families left in this area. For that reason it was called Operation Storm (Operacija Oluja). Ante Gotovina, a General in the Croatian Army, led the operation and the International Criminal Tribunal for The Former Yugoslavia (ICTY) indicted him for war crimes.

Up to 800 ethnic Serb civilians were killed and some 250 000 fled Croatia when in 1995 Croat forces crushed the rebel Serb breakaway state that occupied up to a quarter of the country’s territory since it declared independence from Yugoslavia in 1991.

Drago KovaÄeviÄ‡, one of the bloggers at the Serbian news portal B92, who at the time was the mayor of Knin, the main town in the Krajina region, reposted an extensive text he wrote in 1996 on the occasion of the anniversary of Operation Storm. He detailed the political circumstances in Krajina at the time and also described the beginning of the offensive:

[…] [Krajina] was assaulted at the crack of dawn on August 4, 1995. Knin was showered with very many rockets. In the hospital there were tens of people dying. The lights have gone out. Radio Knin has become silent. There was smoke and fire around. Columns of civilians have already started to leave Knin early in the morning towards the only remaining direction, towards [Lika]. The bombing lasted almost non-stop. There was no pause. In particular around the nearby TV station, the Police station and the northern barracks were fired systematically […]

According to Drago KovaÄeviÄ‡, Peter Galbraith, former U.S. ambassador to Croatia, accused Zagreb last June of plotting and sanctioning the exodus of Serbs in 1995 to create an “ethnically clean” country. Speaking at The Hague war crimes trial of three Croatian generals (Ante Gotovina, Ivan ÄŒermak and Mladen Markac), he said that the leadership headed by late President Franjo TuÄ‘man used ‘Operation Storm’ to ‘cleanse’ Croatia of Serbs. His testimony came as a surprise, since when he testified at the trial of late Serbian strongman Slobodan MiloševiÄ‡ in 2003 Galbraith had said Croatia was not responsible for the ethnic cleansing of Serbs.

Jasmina TešanoviÄ‡, Women in Black activist, reposted in her B92 blog a Women in Black‘s statement (SRP), issued under the title “Anniversary of one more mass war crime”:

Thirteen years have passed since the Storm, the military-police action that caused the mass expulsion of the Serbian population from [Republika Srpska Krajina] region. During this action and immediately after it, members of the Croatian military and para-military formations killed many hundreds of civilians, mainly older people. The Storm is one of the biggest war crimes on the space of former Yugoslavia.

The protagonists of this operation, that were apparently directed to carry out ethnic cleansing, did not live to face justice. Today in The Hague there are trials that arise from command responsibility for some of them who are still alive such as Ante Gotovina. We are hoping that these trials will not end like some others and will not additionally discredit the International Criminal Tribunal for the former Yugoslavia (ICTY) as a deliverer of justice, we are warning that the International Community was also responsible for war crimes committed during the Storm, whose representatives were passively watching the killing of people, the burning of houses and the looting of property of the residents.

Holding all innocent victims in esteem, we have to mention Slobodan MiloševiÄ‡’s regime and his satellites from Republika Srpska Krajina as well as Serbia’s intellectual elite who were spreading propaganda for years about Serbs not being able to live with others nationalities and then, shortly before the Storm, they hypocritically renounced the project named Republika Srpska Krajina and left their people to be victims of ethnic cleansing. And then their false patriotism was shown. We, Women in Black, were meeting columns of refugees on the borders and were giving basic assistance (food, clothes and medicines) to them. Later we were visiting them in the refugee camps. The big usurper patriots were not to be seen anywhere. They showed up only when refugee men were to be arrested and transfered into the [Arkan]’s military camp in Erdut or some other similar places.

Let the Storm be one more warning for us about how terrible the consequences of false patriotism based on financial and political interests can be in spreading hatred that leads regular people into tragedy, while at the same time making the criminal and intellectual elite wealthy.

In his post titled “Which war crimes get prosecuted?”, Paul D’Amato analyzed the civil war in the former Yugoslavia. He wrote:

While it is true that the conflict in the region developed out of the ambitions of Slobodan Milosevic for a greater Serbia, uniting the Serbs of Serbia with those living in Bosnia and Croatia, Croatia’s nationalists under Franjo Tudjman were no less ruthless in their efforts to create a “greater Croatia,” based on the ethnic cleansing of Serbs from the Krajina and Serbs and Muslims from parts of Bosnia.

[…] From the start, there was the complicity of the Western powers in creating the conditions that made war and ethnic cleansing inevitable. As Phil Gasper wrote:

“In the end, Germany’s recognition of Croatia’s independence–without any guarantees of the Serb minority’s national rights in Croatia–made the outbreak of war and the disintegration of Yugoslavia inevitable. The same holds true for Bosnia. Germany and the U.S. recognized Bosnian independence even though the majority of Bosnian Serbs and Croats–about 51 percent of the republic–had rejected it. By doing so, they put their seal of approval on Bosnia’s descent into war.” […]

[…] There is the direct complicity of the United States in the greatest single act of ethnic cleansing that took place during the war–Operation Storm in August 1995. […]

Jonathan of the web site Belgrade Foreign Visitors Club looked back on Peter Galbraith’s testimony at the trial of Ante Gotovina:

[…] Galbraith then addressed one of his previous testimonies, where he said the expulsion of some 250,000 Croatian Serbs did not qualify for ethnic cleansing, “although there had been crimes, committed either on the orders or with the tacit approval of the Croatian leadership, in the presence and with the participation of the military”. […] Galbraith […] said that he and other American officials had information months before Operation Storm that there would be a military attack on the Serb Krajina. […] But the U.S. never green-lighted the operation, he contended. However, since the U.S. administration knew the assault might be launched, “it expressly warned the Croatian authorities and president TuÄ‘man of their obligation to protect the Serb civilians and prisoners of war. The atrocities like those committed in the [Medak Pocket] in 1993 were not to be repeated.”

In the first days after the arrival of the Croatian Army in Knin, Galbraith recounted, the reports of the U.S. embassy personnel indicated there were widespread killings of Serb civilians and destruction of their houses, “thus confirming that the situation in the field was exactly what the U.S. administration wanted to prevent.”

In Galbraith’s opinion, this happened “on the orders or with the tacit approval of the Croatian leadership, in the presence and with the participation of the military”. […]