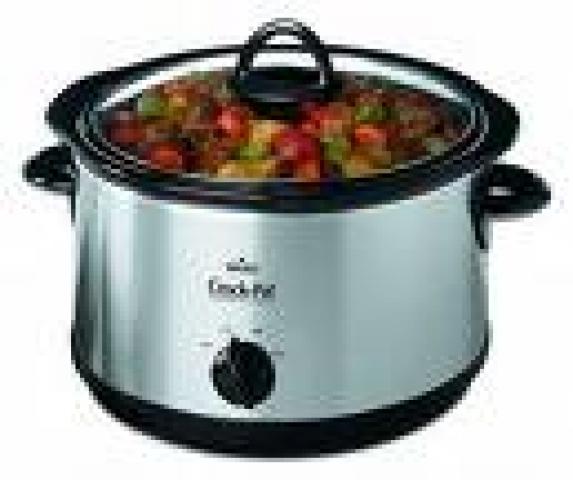 If you like the experience of walking in the door and smelling
dinner cooking without you slaving away in the kitchen
preparing the meal, you’ll love the convenience of a crock pot. Take a few minutes in the morning before work or school to throw some ingredients into the pot, set it, and forget it. When you come home at dinnertime, you’ll be greeted by the aroma of an easy dinner.

Benefits of the Crock Pot:

– You can buy tougher (and less expensive) cuts of meat, since
the crock acts as a tenderizer.

– Meat shrinks less when cooked in the crock, and doesn’t dry
out.

– A slow cooker doesn’t heat up the kitchen nearly as much
as the stovetop or oven, so it’s a perfect hot weather cooking
appliance.

– It frees up space in oven and stovetop. It’s great to use
for parties, large gatherings, or doing a large cooking
session for the freezer.

– Flavors have time to develop while your meal slowly cooks
all day.

– Can be used on a buffet table for serving hot foods (soup,
stew, sauces, meatballs in BBQ sauce, etc.

– Choose a crock pot with a removable liner. You’ll have more
flexibility in ways to use it, and it’s easier to clean.

– Buy a large one (six-quart capacity is good).

– Best if used for recipes with a high water content like
things you’d normally prepare on the stovetop such as
spaghetti sauce, soup, chili and stew.

– For best results, fill the crock at least half full with
food and/or liquid.

– If you’re cooking something like a stew or soup, leave at
least an inch empty (preferably two inches) at the top beneath
the lid to allow for the food to bubble when it reaches a
simmer.

– Don’t peek! Lifting the lid adds time to the cooking process
by letting heat out. Add 15-20 minutes to the cooking time for
each time you lift the lid to peek or stir.

– Brown meats ahead of time for additional color and flavor.
Browning also removes some of the fat from the meat. Fatty
meat cooks more quickly in the crock than lean meat.

– Meat and poultry cooks best if cut into smaller pieces or
chunks rather than cooking as a whole roast or a whole
chicken.

– Fish and seafood should be added near the end of the cooking
time in seafood soups, stews and chowders.

– Vegetables such as carrots and potatoes should be added to
the bottom of the crock beneath any meats, etc. Hard
vegetables need a longer cooking time, and the bottom is the
first part of the cooker to heat up, so they’ll start cooking
sooner.

– Stir in cheese at the end of cooking, or use processed
cheese.

– Milk curdles during long cooking times. Add milk near end of
cooking time (the last hour or so).

– Add spices near the end of the cooking time.

– Stirring usually isn’t required during slow cooking on low
heat. You might want to stir once or twice during the last
hour, but remember that every time you lift the lid, you’re
adding to the cooking time. Two stirring sessions equal a
minimum of half an hour longer cooking.

– Always include liquids in all crock pot cooking recipes.

– Remove the cover by opening away from your face. The steam
is hot enough to burn badly.

– Keep the crock covered while cooking. The lid on a crock
doesn’t provide a tight seal (it isn’t suppose to), but it’s
important to keep the lid in the center of the crock for best
results.

RecipeZarr has a lot of great crock pot recipes!
http://www.recipezaar.com/recipes/crockpot