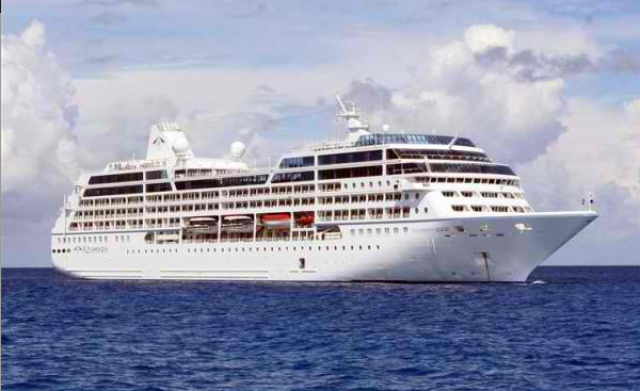 UPDATE: Ship now in Malaysian waters and  with RMN Escourt – expected to dock in Sandakan port shortly. Vessel was given full military protection as it crossed into Malaysian territory by Philippine Navy. –

Manila – It was a nightmare scenario – for the crew of the cruise ship Asamara Quest – a small engine room fire injured 5 brave crewmen who saved the ship from further damage. But left the vessel adrift in one of worlds ‘unsafe seas’.

The Southern Sulu Sea and Islands of Tawi Tawi and those of nearby the Balabac island group are well marked on international charts as ‘dangerous’ not just for hidden reefs and strong currents. But also pirates, robbers, and yes islamic radical terror groups like the Abu Sayyaf.

The Abu Sayyaf have western hostages in an area not far from where the ship without power for hours lay adrift and cut off. The news reports of this were deliberately played down in Manila and other areas. The Sulu Sea’s southern reaches are listed as ‘unsecure border area’s’ for international vessels.

When the ship which is registered to the Miami based Royal Carabean Cruises followed procedure and called for help it was to the US coast guard. Who in turn relayed the information to the Philippine Navy and US forces deployed in the area.

Aircraft were deployed from nearby Philippine air force bases on Palawan Island and Mindanao. A UAV in area for counter terror operations also monitored the ship until Philippine naval and coast guard vessels secured the area. A total of five Patrol craft and two corvette’s were sent to the area along with two civlian police fisheies patrol vessls.

"There was a gap of a few hours where we were somewhat ocncerned – but – overall the responce from the philippine navy and air force was quick enough and the insident brought under control in time that few aboard were endagered." A US military officer assigned to a counter terror unit that rotates out of the Southern Philippines on ‘training’ missions told this writer.

The ship has restored power – it is currently enroute to Sandakan Port on Borneo Island in Malaysia.

A statement released by the ships owners stresses that the cruise which has left Manila on Wednesday was canceled and transportation will be provided to bring all passengers home safetly.

A single crewman was described in ciritcal but stable condition – he was among the  firefighters on the vessel who saved the passengers from any danger. Juan Carlos Rivera Escobar, of undetermined nationality, was reported to be in “unstable” condition after suffering from “neurological damage to due prolonged heat and smoke exposure.” – A philipine newspaper the daily inquirer reported.

Philippine Coast Guard Captain Perfecto Eden said the Azamara Quest, carrying 600 passengers and 411 crew a is now on its way to Sandakan port, and thie ship is on emegency power Saturday night.

"All passengers are safe," Capt. Eden further told reporters about the status of the Azamara Quest, a vessel operated by Miami-based Azamara Club Cruises. A Philippine Navy ship and coast guard vessels is escorting the cruise until it crosses the Malaysian maritime border, Eden added the Malasian Navy will take over at that point.

The only point were Philippine authorities were contacted was when "the captain deemed it necessary to muster all guests at their assembly stations." according to the Philippine coast guards.

The website statement. described the journey of the – The Azamara Quest as a 17-day cruise which started in Hong Kong on Monday with port calls to Manila, before the fire hit – other ports of call were in Indonesia  Balikpapan (Borneo), Palapo (Sulawesi), Benoa Bali, Semarang and Komodo before the journey was to end in Singapore.