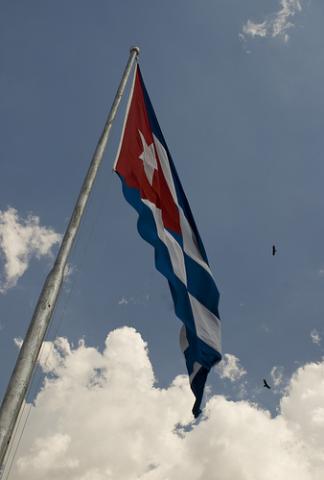 t has been a sad day for the Cuban blogosphere, as netizens received news of the death [1] [ES] of political prisoner Wilman Villar Mendoza, who was on a hunger strike since last November [2]. Many bloggers likened his situation [3] to that of the late prisoner of conscience Orlando Zapata Tamayo [4], who died in 2010, the first Cuban political prisoner to die on hunger strike since 1972.

Like Orlando Zapata and Juan Soto, his blood is on the hands of the Castro dictatorship.

And like those martyrs, he will never be forgotten.

He also linked to a statement from The Coalition of Cuban American Women [6], detailing “the death of political prisoner Wilman Villar Mendoza and how the dictatorship has responded with more repression.”

Several bloggers at babalu also commented on Mendoza’s death. Val Prieto made the point [7] that the dissident’s death “wasn’t solely about the usurption [sic] of his rights and freedoms…about the injustice and indignity unleashed upon him”:

Wilmar Villar Mendoza…on hunger strike for 50 days protesting his incarceration and the abject violation of his basic rights and freedoms, died yesterday at the hands of the Cuban government. He was 31 years of age.

Wilmar Villar Mendoza died a hero, not only because of his courage to stand against the Goliath of the castro regime for his convictions, but because of the steadfast dignity of his sacrifice.

Wilmar Villar Mendoza sacrificed and died so that 11 million of his fellow Cubans could be free of the very tyranny that killed him.

As it happened upon the murders of Zapata Tamayo, Soto, and Pollan, for a brief moment, the assassination of Wilmar Villar Mendoza tore down the facade and the lies of the Castro dictatorship that has as acted as their shield for so many decades.

It may not last long — perhaps hours, maybe days — but for the moment, the Castro dictatorship is exposed.

Perhaps as early as tomorrow, this moment of clarity will dissolve and the lies will return to subjugate the truth. Not because this clarity is too weak or a fleeting moment, but because the world will close its eyes and turn away from the unpleasant truth.

Nevertheless, for now, Wilmar Villar Mendoza’s death is not in vain: for a brief moment, there is clarity in Cuba.

The blog went on to detail [9] reports of “how peaceful human rights activists on the island took to the streets to honor Wilmar’s ultimate sacrifice for freedom and liberty in Cuba”, adding: “These protestors were immediately met by Castro State Security who violently attacked and arrested several of them.”

Pedazos de la Isla [10] explained why Wilman Villar Mendoza must not be forgotten:

I have heard various people say that a hunger strike is a form of suicide, but I do not believe that. The only one at fault for his death is the dictatorship. It was that same dictatorship which arrested Mendoza during November of 2011 when he, along with other activists, peacefully marched down the streets of Contramaestre demanding freedom. And it was that same dictatorship which paid no attention to Wilman’s just demands to be liberated, which led to his hunger strike.

I did not know Wilman Villar Mendoza personally, but when a person puts their own life at risk for the well being of others, and in this case, for the freedom of an entire nation, then that says a lot about a person. The young Cuban, who leaves behind a wife and two young children, joins the list of so many executed, tortured, and beaten men and women, and also of many who have lost their lives on hunger strike as well. He is another Orlando Zapata Tamayo, another Pedro Luis Boitel- two Cubans who, although living in different generations, fought for the same exact cause and died the same way, in horrid conditions but with honor.

Bloggers were also outraged by the manner in which Mendoza’s family was being treated. Pedazos de la Isla noted [10] that “his wife has not even been able to see his body as of Thursday night”, and @Yoani Sanchez posted [11] on Twitter [ES] that:

#cuba I spoke with Maritza Wilmar Villar’s wife and she confirms his death. They have not let her see the body. More info at +5353842338

Tonight two little girls lost their father; a young wife her husband; and a mother her son. Wilmar Villar Mendoza died tonight after his kidneys and other organs failed. He died the result of a prolonged hunger strike provoked by outrage over a profound injustice committed against him by the Castro regime.

The blog also made the point that:

There was little press coverage or official protests regarding his plight until his death appeared imminent [13].

Ladies in White and other opposition activists marched and demonstrated on his behalf suffering brutal beatings and detentions but the international press remained silent. Now that he has died, as was done in the case of Orlando Zapata Tamayo in 2010, the international [14] media [15] is reporting it. Too little and too late for Wilmar Villar Mendoza. Bloggers and activists on twitter had alerted the world early on about his plight. Pedazos de la Isla [16], Uncommon Sense [5], Babalu [17], and Capitol Hill Cubans [18] deserve special mention for getting the word out on their respective blogs.

When confronting a brutal totalitarian dictatorship there is a very simple equation:
silence = violence = death.
International official protests and heightened press scrutiny on behalf of brutalized dissidents means less bloodshed. Silence means that Maritza Pelegrino Cabrera, Wilman’s wife, is now a widow and his two young daughters ages 5 and 6 will not get to grow up having a father.

babalu published and translated [19] a powerful statement on Mendoza’s death from one of Cuba’s most high-profile bloggers, Yoani Sanchez:

I want to denounce that in my country, people have to use their bodies, their intestines, their stomachs as a battlefield, as as a way to mount a civic protest. It is very lamentable that an entire population — 11-million Cubans on this island — has had all their rights as citizens taken away or limited. The civic, electoral, and judicial avenues for citizens to seek change, to demand a transformation, to demand the end of the status quo in our country has been blocked. What do we have left? Well, the people then must use hunger strikes as a way to express their nonconformity. It is very sad what has happened today, the death of Wilmar Villar.

That is the denouncement I wanted to make. Perhaps it is just like a bottle thrown into the sea, something that falls into an abyss, but…I want to leave constancy of this. Please, we do not want to continue utilizing our skin, our bones, as a way to show our outrage. We have to have the right to do it without repression.