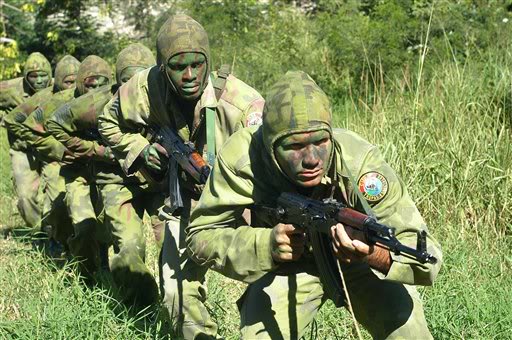 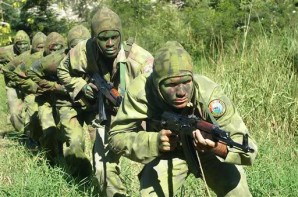 Commando-tropas-especiales-cuba. The best of the best.

Cuban Commando Tropas especiales (CTE) are a elite unit specialized for fighting in the jungle. They participated in battles in Angola and other African countries during the Cold War. They also participated in the conflicts in Central America, as in Nicaragua. But there primary role is to guard the Motherland of Cuba from enemy invasion.  In wartime they act as irregular troops.

Many members of Commando Tropas are career officers in the Cuban military.

A commando is a soldier or operative of an elite light infantry or special operations force often specializing in amphibious landings, parachuting or abseiling. Originally “a commando” was a type of combat unit, as opposed to an individual in that unit. In other languages, commando and kommando denote a “command“, including the sense of a military or an elite special operations unit.

In the militaries and governments of most countries, commandos are distinctive in that they specialize in assault on unconventional high-value targets.

It is a never ending battle to keep these elite troops properly trained as Commandos .

In addition Commando Tropas especiales receive instruction in tactics of invisibility and stealthy movement. For example Commandos must not only be undetectable to the ear, they must also remain equally unnoticed by the eye. The human scope of visual perception is the focal point in this situation. The Commandos must learn how different types of vision affect their chances of remaining unseen. This involves lots of work.

One Cuban officer, part of the Commando Tropas especiales training care (who asked not to be identified in this report) said: “To move soundlessly requires the warrior to commit themselves to countless hours of practicing and perfecting their technique. Traversing every type of terrain imaginable so that when specific surfaces are encountered during field operations, they are fully prepared to surpass them in a silent fashion.

One technique rumored to be used in training Commandos was trying to have them sneak up on dogs, which as you can imagine is incredibly hard to do, even under the best of circumstances. Its these types of training methods which set Commando Tropas especiales apart in many way from other special forces units.