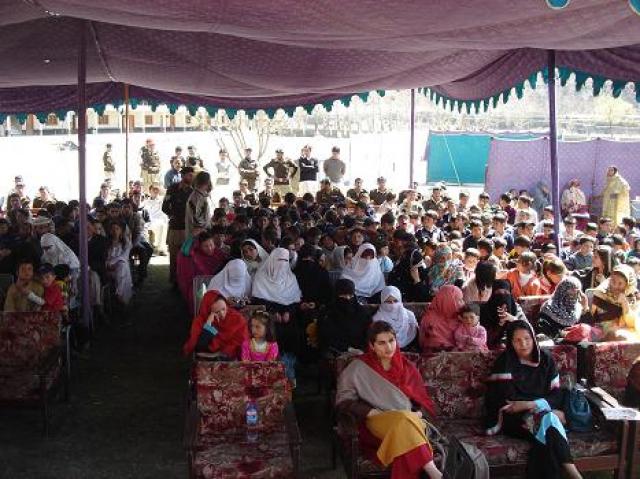 CHITRAL: Cultural show was held here in Chitral town on the occasion of Nouroz festival which was jointly celebrated by Tourism Corporation Khyber Pukhtunkhwa (TCKP)  festival of indigenous cuisines and the evening musical show through the arrangement of Chitral Association for Mountain Area Tourism (CAMAT)
The slogan of the day was ‘our culture is our identity; its protection is our need’. The  objective of the activity was to protect and promote the traditional food of Chitral and to link the same with tourism industry for the economic empowerment and welfare of women who are normally involved in cooking at household level in the entire region.
It is to be noted that the young generation has almost had forgotten the names and tastes of their cultural cuisines, which means they could disappear very soon without adding economic incentives and linking it with tourism industry. This was the overarching objective of the event.
The food festival implemented in collaboration with Girl Guides a voluntary organization of young school students in Dolomoch, Chitral town. The event was planned, monitored and supervised by community representatives and judges.
The cuisines showcased on the occasion i.e. shoshp,  chhira shapik, ghara, shoshpalaki, chamborogh, sanabachi, mol and lazhek (local traditional food) were cooked at household level. They were highly appreciated and categorized in respect of tastes by judges, who were assigned with the task. The participants were awarded with per dish-based cash awards.
The traditional hospitality and local cuisines of Chitral could go hand in hand so far as tourism development matters.  However, much work needs to be done to improve hospitality and taste of the cuisines without compromising on its originality.  This could be possible through formal cooking training and hospitality courses.
Meanwhile, the evening musical event was also organized in Chitral town  participated by a wide spectrum of community members from different valleys in addition to folksingers, folk dancers and instrumentalists.
Some forgotten folk dances i.e. anaphari, tatali wawali, chong rigishi and barwazi were performed by expert folk dancers. The musical event mostly focused on the participation of young talented artists hailing from rural background, which made the program culturally more colorful and vibrant. Occasion like this could be used to give exposure to the young artists to groom up the laden potential of music.
The music of pasture flutists also featured in the musical show. The instrument is played by nomads as they tend cattle in the summer pastures. Its plaintive notes echo in the rocks and makes melancholic resonance that enthrall the listeners.
Plantation Drive kicked at Chitral.
CHITRAL: Plantation campaign was kicked in Chitral organized by Chitral Integrated Development Program (CIADP). District Coordination Officer Chitral Rahmatullah Wazir and District Police Officer Haji Abdul Rashid were chief guests on the occasion who planned sapling and started plantation Drive. On this occasion briefing representatives of different Local Support Organizations (LSOs) Asfandiar Khan Program Coordinator of THRIVE emphasized on participants to must plan one sapling because our environment is badly impacting due to deforestation and plantation ratio and its growth is very slow as comparative brutality cutting of forest. CIADP also distributed sapling among the representatives of LSO. He said that some 100000 sapling would be distributed among local community to increase and promote forest and greenery in Chitral. He said that some mini orchards would also be planned in different parts of Chitral so as to overcome shortage of fresh and dry fruit. A large number of people were present on the occasion.
G.H. Farooqi PO Box No. 50 GPO Chitral Pakistan Or Bank Islami Main Branch Chitral
Telephone No 0092 3025989602
03337069572
03159698446
03469002167
0943302295
0943316052
0943414418
email: gulhamad@gmail.com
Filed under: Media & Tech, World
Share Tweet Pin G Plus Email
previous article: I am no more a political threat: Prof. Yunus
next article: An extrovert is often impatient and inconsiderate with others