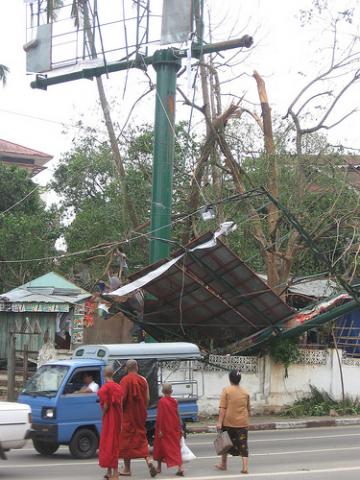 The UN Secretary General Ban Ki Moon has been able to get through the Junta-set barriers for the sake of cyclone survivors. In principle, the Junta leaders have agreed to allow in international aid works but other conditions are not known. The scientific status of the cyclone victims is still unknown not only to the international community but also the Burmese themselves.

As there are many communication barriers set deliberately by the military rulers, it is not easy to know current facts. The world knows quite scantily about how many monks and other democrats were killed in Burma.

One has to wonder about how many were killed in the recent cyclone. Yet international reports have estimated the death toll to range from 80,000 to 100,000 because the fate of almost 60,000 people is still unknown.

There might be serious reasons behind the military rulers’ reluctance to inform fellow human about the losses caused by the recent cyclone. It is apparent that the junta is more worried about its own longevity than about people. It thinks that Burma’s democratic movement may get reinforced with the entry of international aid workers.

As information is a key tool for achieving power, the junta wants to suppress the factual information so that neither their citizens nor the international will be able to take a correct decision as to their policies regarding Myanmar. In absence of timely information, one may even assume that there may be a mental cyclone from which the Burmese people may be suffering at present.

Information blackout created by the junta may have created a mental cyclone to the victimized Burmese. The recent cyclone has demonstrated the junta rulers’ cruelties and apathy to human sufferings.

There is difference between taking up the path of puppetism and becoming democrats with the capacity of making independent decisions. Should Burmese democratic leaderships be determined to make independent decisions as to their national agenda, there is no harm in using international support and aid in their democratic movement. Thus, the recent cyclone shows the need for the Burmese to go ahead with their democratic agenda because humanitarianism gets tortured under military rule founded on gun culture.