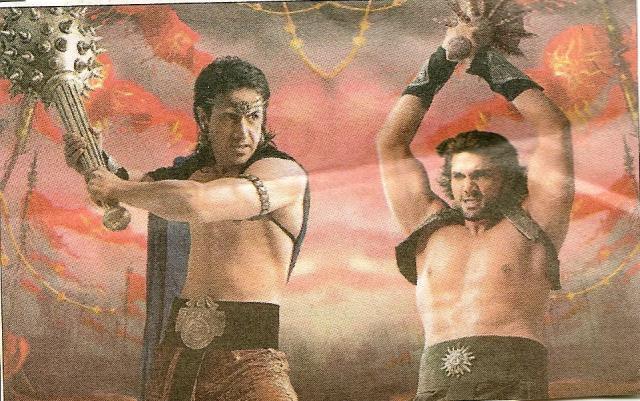 Ekta kapoor aka Daily soap queen, famous for her Saas bahu type of television serial has recently produced KAHANI HUMARE MAHABHARAT KI on Chanel 9x. The serial started from 7th July 2008. It is telecasted on channel 9 xs at 9.00 pm. The first episode was itself Dropadhi cheer haran. After viewing the first episode I felt that  Ekta’s Mahabharat  will not be as popular as B.R. Chopra’s Mahabharat  which was telecasted on Doordarshan some 15—16 years back .According to me because of following reasons Ekta’s Mahabharat will suffer .

1) The dialogues are very filmy.
2) The costumes & grooming style of artists in Ekta’s Mhabharat is towards European side & not towards traditional India Dropadhi has a big tattoo on her chest & other characters have tattoos on arms.
3) The characters look glamorous.
4) Till date if somebody talks about Shakuni mama people visualize Guffi Pental. Guffi Pental played role of Shakuni mama in B.R. Chopra’s Mahabharat. . In other words people have not forgotten the old Mahabharat.
5) Last but not least a major reason to why Ekta may not become Epic queen is that she has taken all artists from her daily Saas Bahu soaps in Mhabharat. As s result it is hard to accept Natasha as Dropadhi, Sakshi Tanwar (Parvati of Khani Ghar Ghar ki) as Ganga maiya, Karan Karmarkar (Om of Khani Ghar Ghar ki) as Maharaj Shantanu.

This is my opinion about Ekta’s Mahabharat but still all the best to Ekta & Balaji Telefilms. Hope that etter ‘K ‘letter remains lucky for her.