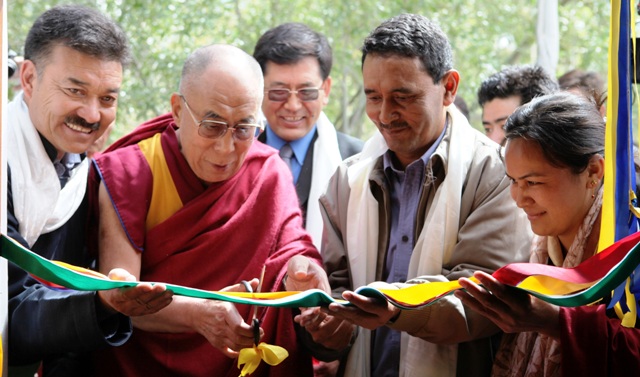 Leh,August 22 (Scoop News)- A 10 Kwp SPV Power Plant installed and commissioned by the Ladakh Renewable Energy Dev. Agency (LREDA) at the Jevetsal Photang, Choglamsar, the Summer Palace of, the Buddhist Spiritual Leader Dalai Lama in Leh was inaugurated by the Dalai Lama in the presence of the Minister of Urban Dev. And Urban Local Bodies (Govt. of J&K), Nawang Rigzin Jora and the Chief Executive Councilor, LAHDC, Rigzin Spalbar. Being a spokesperson for issues on climate change, the Dalai Lama commend the efforts of Ladakh and LREDA in promoting the use of clean energy to meet the energy demands of all persons in the region and setting an example for the country and the world. Buddhist Spiritual Leader mentioned that with the ever increasing population of the world, meeting energy demands will significantly increase; therefore the need for using renewable energy sources is the need of the hour. He stated that energy access should be available all people and no discrimination should occur in this regard. It was also stated by the Dalai Lama that using renewable energy in the right manner will help humanity live in harmony with the environment.
Jigmet Takpa, Project Director, LREDA presented the Dalai Lama with a multipurpose solar light at the occasion, which was well appreciated by him. LREDA has distributed over 15,000 such solar lights on market mode, which amounts to more than 70% of the households of Leh distt. from the year 2011. This programme of LREDA has provided a robust and durable lighting product to the people of the region at costs which can be afforded by the villagers. In addition, LREDA is also currently implementing a flagship programme of the Ministry of New and Renewable Energy (MNRE), Government of India, the Ladakh Renewable Energy Initiative, deemed to be the largest off-grid renewable energy project in the world. The project sees to the development of micro-hydro projects with a total capacity of 11.2 MW, 125 solar-photovoltaic power plants (various capacities) for remote villages, medical, educational and religious institutions, solar thermal systems such for water heating and cooking applications, domestic and commercial green houses and ground based heat pumping for space heating applications. LREDA is also putting in efforts in reducing the consumption of energy by researching home energy management systems. Once an energy-starved region, the state of Leh distt. has changed; LREDA projects have penetrated into the remotest regions of Leh district. and a majority of the population of Leh distt. are directly benefiting from the use of renewable energy.