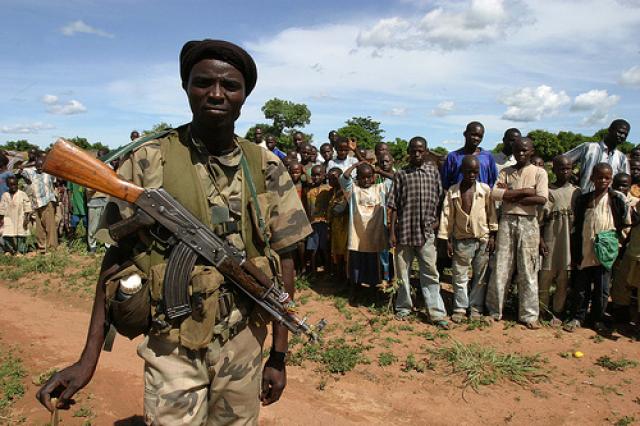 The pending indictment of Omar al-Bashir by the International Criminal Court, ICC, appears to have eroded critical support for the embattled Sudanese president among his notorious janjaweed militia allies.

Often translated as “devils on horseback”, the janjaweed are ethnic-Arab militias who have fought alongside the Sudan Armed Forces, SAF, in Darfur against ethnic African rebels.

Since ICC chief prosecutor Luis Moreno-Ocampo asked the ICC in July to issue war crimes indictments against al-Bashir, some janjaweed commanders say they no longer support the government, fearing that they too, might be indicted.

“When the ICC brought its charges against Ali Kushayb, all the commanders on the ground were astonished and terrified because they didn’t know that someone was tracking them,” said Said Hassab Elrasoul. “But they were completely wrong. The court knows a lot of detail as you see now.”

Elrasoul identified himself as a former janjaweed commander under Mohamed Hamdan, based in the north Darfur town of Kabkabeya.

Hamdan is a well known janjaweed leader who in October 2007 threatened to abandon the government, along with his 20,000 armed men, and join Darfur rebels. Hamdan remained loyal, however, after reportedly hatching an unspecified deal with Khartoum officials.

In April 2007, judges at the ICC issued arrest warrants for two Sudanese, humanitarian affairs ministers Ahmad Harun and janjaweed militia leader Ali Kushayb, for 51 counts of crimes against humanity and war crimes related to Darfur. Neither has been arrested.

“We are weighing alternatives and examining all possibilities,” Elrasoul said. “This thing is real. They are going to charge the president. You have to believe it now and be ready for it.

“For me, the accusation [against] Kushayb was an early warning. I took it seriously at the right time, and gave up being [an] agent of Khartoum. In fact, in the eyes of Khartoum, we, as Darfur Arabs, are not different from our African brothers.”

Dissatisfaction with the Sudan government arose because promises have not been kept, Elrasoul said.

“The government promised us land and glory, but we end up as fugitives today,” Elrasoul said. “I learned the lessons now. I got it. We have been used as dirty tools in a political game.”

Another janjaweed commander, known as A Zakey, who is from the South Darfur area of Buram, also said he no longer supports the Sudan government.

“We were in harmony with the government until news about a possible indictment of al-Bashir broke,” Zakey told IWPR.

When word spread that some janjaweed were abandoning the regime, officials are said to have feared that they might cooperate with ICC prosecutors.

“Khartoum thought that we could easily be tempted by its enemies after hearing rumours that some of us were ready to testify before the [ICC] if the government didn’t offer us more power and wealth,” Zakey said.

“Officials in Khartoum took the rumours as facts, and sent a heavily armed rival group, which engaged us in a battle. We lost 19, and more than 26 were injured. That is why we are fighting the government now.

“This is a frightened and cowardly government who lost its courage and is fearful of being tried abroad,” Zakey said. “I am no longer on their side.”

It’s unclear just how many janjaweed are breaking ranks. But those who remain loyal to the regime seem rattled by the defections.

One loyalist janjaweed commander, who wished to remain anonymous, but said he was a relative of janjaweed leader Musa Hilal, from the Saraf Omra area of northwest Darfur, said, “Of course, no one can deny or ignore the new reality created by this threat [of] the ICC. Yes, there is an impending danger, but we are determined to carry on fighting. We are going to stand firm with [al-Bashir] until the very end.

“I know many who became scared after the threat of the court ICC, and left us for their own good. But this is not the time to back down. I am not sure whether we are going to win the war or not, but there is no option left rather than continue fighting.”

Since the janjaweed militias have played a vital role in Khartoum’s counter-insurgency against Darfur rebels, Sudan is desperate to keep them close.

Earlier this month, however, Ali Hussein Daousa, an associate of former Darfur rebel leader Minni Minnawi who joined the government, told a press conference in Khartoum that only trusted janjaweed militias were being rearmed.

Lacking full support from the janjaweed, some suggest, casts doubt on the government’s claim that the situation in Darfur will deteriorate if ICC indicts al-Bashir.

In addition, the Sudan government faces potentials threats from the South Kordofan region which borders Darfur, and from growing tensions with the semi-autonomous South Sudan over the disputed oil-rich Abyei region.