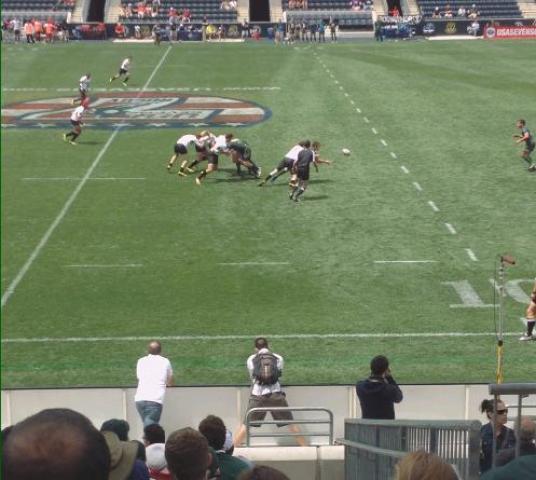 Dartmouth College defeated Arizona 24-5 Sunday to take the National Collegiate Championship in Rugby Sevens for the second straight year.  The tournament featured 16 university teams from around the US in two action filled days at Philadelphia’s new 18,000-seat PPL Park.  The event’s innovative new format, along with rare live-television coverage, may change the face of college rugby for years to come.

Earlier in the day Dartmouth had defeated Cal Berkeley 21-19 after being down 19-7 in the second half.  Cal Berkeley has dominated US College Rugby for decades with 19 national championships in the last 21 years.

Dartmouth was led by seniors Nate Brakely and Derek Fish, and freshman Madison Hughes who was named the Tournament MVP.  Dartmouth’s highly regarded coach, Alex Magleby, is now being seen as a leading candidate to coach the US Olympic Team.

Rugby sevens should not be confused with the far more common 15 player per side version played in the US and throughout the world.  All University and Club teams in the US concentrate on their 15 player teams and draw from those ranks to field sevens teams for tournaments typically held in the off-season.  The seven per side version of the game received a considerable boost when it was selected as an Olympic event for the 2016 Games in Rio de Janeiro. Both men’s and women’s teams will compete.

The US teams will have a tough go of it in the Olympics.  The reality in the US is that those athletes who can seriously run and tackle at a certain level can earn millions in the NFL.  There is thus a well-defined upper limit on talent that does not exist in the rest of the world.  No teams in the US pay their players although a handful of Americans are said to have made professional teams in other parts of the world.  The best rugby players in the world make nowhere near what professional athletes in other sports can earn.

The rugby programs at almost all US colleges and universities are classified as club sports, a step below the varsity designation which can bring benefits in finance and recruiting. Historically teams were often manned by athletes who couldn’t quite make it in other sports; the growth of the sport was seen as a grass-roots effort.   Dartmouth alumni have come together to build perhaps the best rugby facility in the nation.  Some programs have a paid coaching staff; most do not.

Also notable at the Philadelphia tournament was an increased African American presence compared to years past.  As with ice hockey, traditional US Rugby has been decidedly lacking in minority participation, particularly compared to football and basketball where black players often dominate.  Rugby clubs across America are made up of recent graduates of elite universities and it is fertile ground indeed for employment networking.  Several of the best players at the tournament were black and one of the high school teams that played an exhibition game fielded and all-black side.

The rise in high school teams is another surprise for the sport.  For many years both club and university teams were largely made up of former football players.  It was said that the best thing for a good college rugby team was a troubled football program.  Nowadays coaches at elite colleges compete for the best high school prospects.

The PPL stadium, located in an economically depressed area south of Philadelphia, was an ideal venue for the event.  State of the art giant LED displays, ultra-fast 25 minute games, professional cheerleaders, and a host of other slick entertainment additions combined to form a rugby experience entirely different from what most spectators were used to. Food, parking, tickets, and souvenirs were top dollar but no one seemed to mind.

Attendance was probably about 5000, not enough to fill the stadium but still a big turnout for a US rugby event.  Event management was careful to move everyone into one side of the stadium so that the stands would look full to the television audience.

It was a thrilling day indeed for the large contingent of Dartmouth people who made it to the tournament.  The success of this year’s event resulted in an agreement for the tournament to be held there for the next two years.  I won’t miss it for the world.