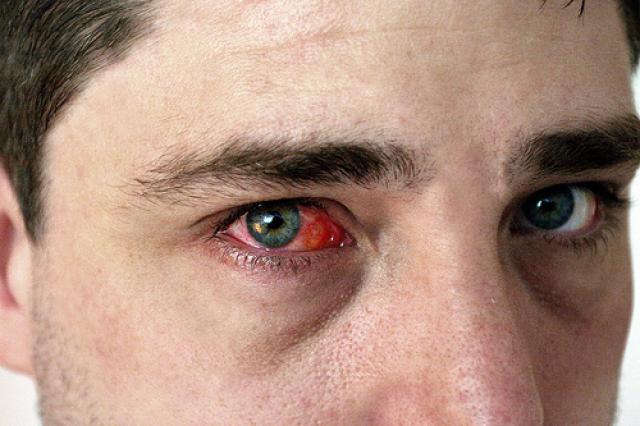 When caused by bacteria, the eye often discharges a thick white or yellow pus, and the infection spreads rapidly from person to person by hand-to-eye contact.  Because the infection is caused by a germ (carried by contaminated fingers, towel, or handkerchief) both eyes are often involved.  The disease is most common in children and young adults.  Often several in the same household or school are affected, the disease being easily communicated.  The course of the disease when not treated is ten to fourteen days.

To avoid transmitting it, doctors advise that patients should not share face cloths or towels, and should wash their hands frequently, especially after touching their eyes.  Sharing cosmetics is often a source of infection among teenage girls.  An ophthalmologist will prescribe appropriate medications, which should clear the condition quickly.

Conjunctivitis is basically an inflammation of the mucous membranes around the eyes, and can be caused by several things besides bacterial infection.  When caused by viruses – such as those of influenza – the eyes become red and water excessively, but there is little discharge; the condition is often accompanied by a fever and sore throat.  Later, the discharge contains more mucus and, in severe cases, a mixture of mucus and pus.  The patient complains of scratching, burning, and smarting sensations in the eyelids.  Exposure to light may increase the discomfort.  Warm eye compresses may give relief, but there is no prescribed medication because viruses are not sensitive to antibiotics.  Once again, cosmetics are a frequent means of spreading the infection.

Asthma and other allergies may also trigger conjunctivitis, which in this case may make the eyes water, cause intense itching, and produce swollen eyelids and a sticky discharge.  Antihistamines and eye drops, as well as ice packs and cold compresses, may alleviate allergic conjunctivitis.  Certain seasonal allergies respond to special antiallergy medicines.  An additional form of allergy may develop in response to contact lenses or the solutions used to care for them.

Finally, certain chemicals – including pesticides, air pollutants, and chlorine – may also cause conjunctivitis.  The best way to deal with chemical irritants is to protect the eyes by wearing goggles or to flush the irritants out of the eyes immediately after being exposed to them.

Filed under: Health & Science, Lifestyle
Share Tweet Pin G Plus Email
previous article: Bias Against a Girl is a Shame
next article: Blogtrotters Now on GroundReport