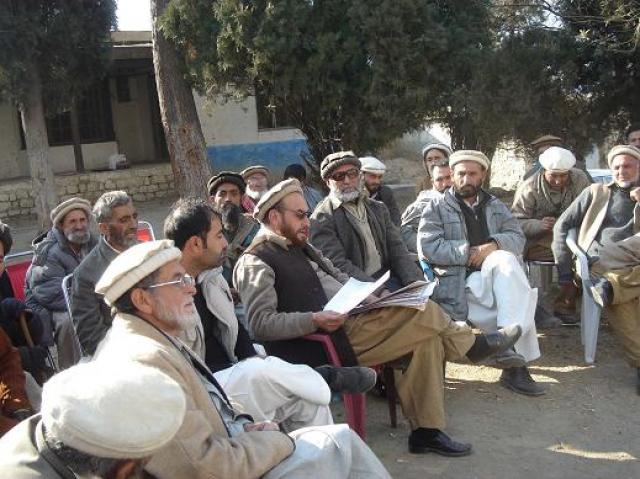 CHITRAL: Third Death Anniversary of Benazir Bhutto Shaheed was observed at Drosh some 45 KM from here. Senior party workers and PPP Jialay were present on the occasion. The speakers paid rich tribute to Shaheed Benazir Bhutto who sacrificed her life for the nation. They said that Bhutto families have so many martyrs who sacrificed their lives for the nation. The speakers also hailed meritorious services of Shaheed Zulfiqar Ali Bhotto and termed him an Islamic leader on world level. They said that treacherous are existing in every government and they harm our mutual harmony but you must be most careful from these treacherous. They stressed on unity and rendering service of poor segment of the society which is mandate of Pakistan Peoples Party. They also demanded for giving exemplary punishment to killer of BB Bhutto Shaheed. They also appreciated wisdom of President Asif Ali Zardari who plaid vital role for sovereignty of the country on a very fragile and dangerous turn. At last a meeting of senior workers of PPP was also held at Afzal Shah House where they lamented district cabinet of PPP and demanded unanimously for dissolving of the district cabinet. They also criticized Saleem Khan for recruiting of 47 cobs in border police but all of them belong to Ismaili community. They said that due to incompetence and negligence of district cabinet two seats were lost in election 2008. they demanded from central cabinet of Pakistan Peoples Party for immediate dissolving of district cabinet and re-election of PPP district cabinet. At last they offer Dua and Fatiha for the soul of martyred Benazir Bhutto and offer for keep her soul in rest. The speakers also criticized Saleem Khan and other cabinet members for nepotism and involved in malpractice.