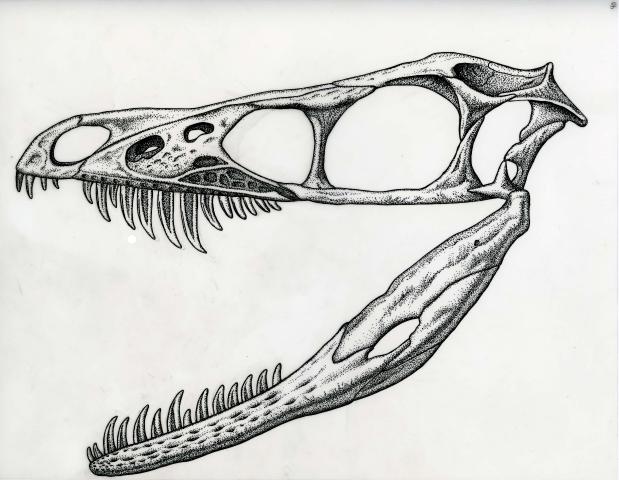 In case the Velociraptors in “Jurassic Park” weren’t scary enough for you, perhaps you’ll be glad to know that some of their close relatives were probably also venomous.

Paleontologists from the University of Kansas, Lawrence, KS, working with a Chinese colleague, have shown that the feathered but flightless Sinornithosaurus possessed grooves in many of its fangs similar to those of modern day venomous snakes and lizards.

The animals also had special depressions on the side of the face thought by these researchers to have housed a poison gland. This connected with a long lateral depression above the tooth row that delivered venom to a series of especially elongated, grooved teeth on the upper jaw.

Sinornithosaurus lived 128 million years ago in the prehistoric forests of northeastern China that were filled with a diverse array of animals including primitive birds, which the Sinornithosaurus is believed to have preyed upon.

The University of Kansas’ Dr. David Burnham, senior author of the research, said that Sinornithosaurus “was about the size of a turkey but it had a five inch long skull full of teeth.”

The proportions of parts of the skull of Sinornithosaurus nonetheless suggested to the researchers that the animal had “only a moderate bite force that may have had difficulty in subduing larger prey.” In this case, the scientists suggest the venom may have produced a “rapid state of shock” in prey that would inhibit their ability to escape.

Many existing poisonous animals use venom as “strategy for prey control, rather than a quick death,” the scientists note.  Their work is published in the January 12, 2010 edition of The Proceedings of the National Academy of Sciences, with Sinornithosaurus in fact gracing the cover.

What about other dinosaurs?

“We have yet to confirm it, but we suspect that Microraptor may have been venomous, too,” Dr. Burnham said.

That work is currently in progress.

Meanwhile, if Jurassic Park ever reopens let’s hope they’ve developed the appropriate anti-venoms by then.

Leo Kretzner is a molecular biologist and science writer living in Claremont, CA