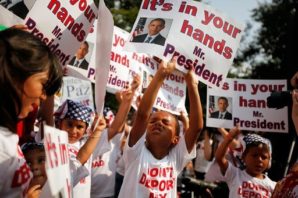 Illegals and legal aliens protest the flash flood of illegals coming across the border, as Republicans and Democrats fight each other of procedural matters in Congress.

On August 1, 2014 Rep. Chris Van Holland of Maryland requested permission to speak on the issue of immigration and engaged another House member  in debate Rep. Polis of Colorado in a debate on immigration issues. Specifically section 4 of that rule, (House Resolution 696) which is before the House which changes the rules of the House to say that a motion may only be made by the majority leader or his designee, as opposed to the privileged motion required under the underlying rule.

That is a specious claim, but what is incredible is the very next day our Republican colleagues are here suspending democracy in the House, changing the standing rules of the House to take away from any Member of the House the opportunity to offer a motion with respect to the transportation bill, which is what the standing rules of the House provide, and they want to say no, we are going to take that right away from a Member, and we are going to give it exclusively to the Republican leader or the Republican leader’s designee.

Let’s not play games with the rule, that this rule allows every Member their rights. The Speaker is not the king, and we should make sure that every Member has an opportunity.”