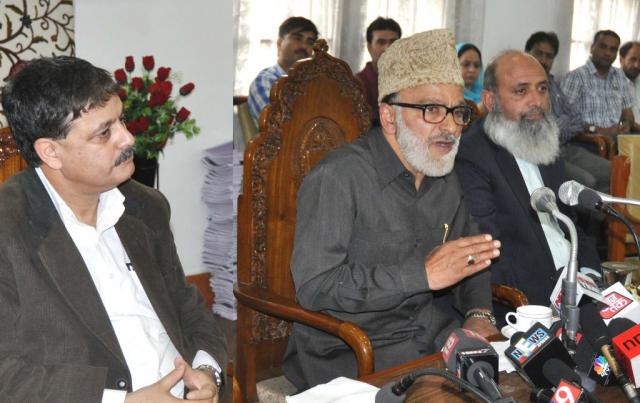 ,June 06 (Scoop News)- Stating that adequate empowerment to Panchayati Raj Institutions (PRIs) has been ensured, Minister for Rural Development, Law, Justice and Parliamentary Affairs,  Ali Mohammad Sagar said that the government has fulfilled its promise of decentralization of powers to the grass root level.

Terming the participation of people in large numbers in the Panchayati Raj elections as a watershed in the history of the country, the Minister said that the orders have already been issued for empowering the PRIs with powers of 14 vital departments and we have by the same ensured the democratic decentralization of powers to the grass root level.

Addressing a press conference in ,Sagar said that the government has directed for making Additional District Development Commissioner’s as the Nodal Officers to monitor the operationalization of the orders empowering the PRIs on day-to-day basis. He said that the necessary orders have already been issued and it is a duty of the officers to ensure that the same are implemented in letter and spirit maintaining that the local representatives should be involved in effective implementation of the 14 departments with whose powers the PRIs have been empowered.

“An amount of Rs. 115 crore has been already released for repair, renovation and construction of Panchayat Ghars across the state besides creating a Panchayati fund for taking up certain works by the PRIs and an amount of Rs. 42 crore has been sanctioned for the same”, the Minister said maintaining that besides this an amount of Rs. 25, 000 has also been released to every Panchayat for purchase of furniture and rent. The Rural Development Department has already prepared and submitted a detailed proposal with regard to the honorarium of the panches and sarpanches which is under consideration of the government, the Minister added.

Referring to the demand of certain quarters for incorporation of the 73rd amendment, the Minister informed that the Panchayati Raj Act enacted by the state legislature is very comprehensive and it substantially incorporates the spirit of the constitution amendment adding that constitution of fianance and election commissions have also been envisaged in the State Act.

Sagar said that the elections to the Block Development Councils (BDCs) would be held very soon so to put in order the 3rd tier of the Panchayati Raj system.  “We are held by our promise to put in place the three tiers of the Panchayati Raj System for ensuring the effective decentralization of the powers and involving the people at grass root level in policy formulation and implementation of various welfare schemes”, the Minister said maintaining  that the requisite formalities are already being completed for holding elections to BDCs .