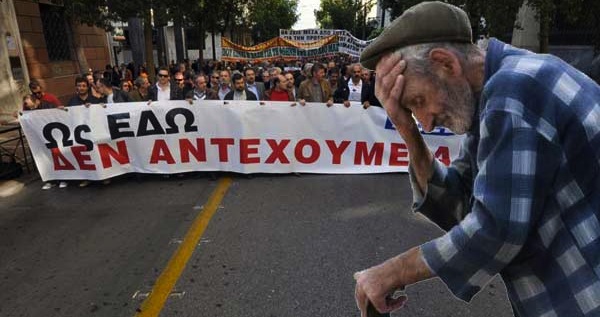 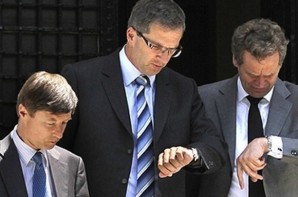 The Boys from the Troika are always on time. 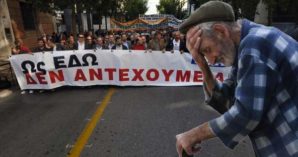 “Angela Merkel and François Hollande are sitting on a volcano.”

It’s hard work getting the news from the news these days, especially if you want to know about a country like Greece. Far-away birthplace of democracy, a bit exotic, anachronistic Mediterranean lifestyle, Zorba et fils, etc. What does any of that mean? Strange things are happening there but what exactly is going on? The Greeks ran up quite a tab at the bar, or so the financial sections tell us on a regular basis.

Almost everything we read is filtered through the point of view of the Troika – the IMF, the European Central Bank and the European Commission – or the Greek government. We know that representatives of the Troika – established during the first stage of Greece’s “rescue” in May 2010 – have been in Greece since Tuesday of last week, meeting with the Greek government about the latest round of potential bailouts for that country. Beyond the leaks from either side, the rest, for us at any rate, is guesswork.

As of Sunday, November 17, no decision had been announced. The Troika is typically very business-like with its clients (out with the whip, sign here, see you later) – and then the next round of what the press likes to call “belt-tightening” begins. The New Democracy-PASOK government survived a no-confidence vote on Monday the 11th but that hardly quelled the sense that they are hanging by their thumbs. There is no compelling reason for the parliament, where the neo-Nazi Golden Dawn party holds 18 seats, to collaborate with them.

We do know a few things: that the Troika is a quasi-legal junta, created during the first stage of Greece’s trauma. The IMF was invited to the party at the insistence of Angela Merkel. Readers with long memories may remember that Dominique Strauss-Kahn was on his way to meet Merkel to present his plan to “save Greece,” when he was abruptly detained in New York. A sexy little drama that knocked Greece off the front pages for a few weeks.

The Troika’s mission is to enforce an austerity program that includes the selling-off of government assets and the decimation of public services, and that even within the IMF, there is dissension over the absurd goal of turning Greece into a productive satellite of Germany. We also know or suspect that any “bailout” of Greece will only impoverish the country yet further. That’s the public record regarding employment, savings, pensions, access to housing and food. You can read it here on Ground Report and find it many other places as well.

Language, meanwhile, gets so knocked around by the pros it throws its hands up in despair. Defeat comes at the price of rational thought: being rescued by the Troika means becoming a pauper in your own country, means your pension has vanished, you are a month or so away from losing the roof over your head and your hand is in the garbage looking for food.

Bailouts are popular, too, but aren’t what they seem. People who aren’t there have the impression the money is being used for essential services, to keep the store open so to speak. But money destined for Greece doesn’t stay there: it is channeled from the IMF and the EU to Greece and is then re-routed to banks in, among other places, Germany and France in the form of debt payments. The Greeks have to be content with another round of belt-tightening.

The conservative government of Prime Minister Antonis Samaras, along with his coalition partner, Socialist Evangelos Venizelos, is said to be desperate not to tamper with what they consider Greece’s “success story,” one which includes massive unemployment and at least 20 percent of the population dependent on soup kitchens for the next meal. His figure is 700 million Euros to meet the debt payment schedule. The Troika is said to be looking for 2.9 billion Euros in savings from the current budget.

That explains the lack of an agreement since last Tuesday at least in part. The Troika is being held hostage. Round One to Greece.

Spectacularly, no one in the government mentions the list of 2,062 Greeks who are holding at least $1.95 billion in secret Swiss bank accounts. A list the government has had in its possession for at least three years without a single prosecution. (Interested readers can learn more here.) The list originated with Christine Lagarde, currently head of the IMF and then cabinet minister in the French government, so the technocrats visiting Greece know the score. Much easier to stare at the wall than bring up an indelicate matter like that during negotiations. Rumor has it the previous finance minister read the list carefully before erasing his relatives’s names.

Low-volume rumblings can be heard if you lean in close. Internal documents leaked from the IMF last week reveal that as early as May 2010, more than 40 IMF member states, all outside Europe, were opposed to the aid plan drawn up for Athens. (This in a report from last week’s Wall Street Journal.) The dissenters apparently thought that new infusions of money without a write-down of debt was impractical and even insane. They lost.

The Troika itself is said to be headed for divorce. “The ECB must refrain from intervening in highly political decisions with its advice on taxes or cuts in spending. And yet that is just what it has been doing inside the troika. It must get out of it as soon as possible,” says Paul De Grauwe, a professor at the London School of Economics. In June of this year, a high official at the IMF publicly disagreed with the Troika’s agenda in Greece.

Even the pro-government publication Ekathimerini paints a decidedly gloomy picture: “Unfortunately, what this means in practical terms is that the current political system is not in a position to lead the country any further in terms of reforms. It doesn’t truly believe in these reforms and it does not have the stamina to clash with its traditional clientele,” writes Alexis Papachelas on November 10. Not exactly a ringing endorsement from a pro-government journo.

In other words: it isn’t working, it isn’t working at all, and yet our bedazzled technocrats act in public as if it actually does, even when they don’t particularly believe it either. It’s the way the world does its “business.”

Consider this: the Financial Times reported last weekend that Stephen King, chief economist at HSBC, “discovered” that nearly all of his bank’s country forecasts stated that the country-in-question planned to export its way to growth. (Ah, growth, endless growth. The Holy Grail, the never-ending rainbow at the end of the road.) Where they will all export to is the question, with every other country on earth frantically exporting its way to prosperity. Mars and Venus are at the head of the list, and why not? (William Pfaff has more on this.)

Greece lost some 35,000 jobs in October. So much for that success story. Unemployment in many parts of the country is close to 50%. My sense is that the Troika’s technocrats simply live too high up in the stratosphere – somewhere near their very own cloud 9 – to be concerned with anything so gritty as jobs or hunger or survival. For them the people in the street are an abstraction on the order of heroic rescues and bailouts.

The so-called Washington Consensus is dead, and yet the consensus lives on, proof once again that the world’s sense of reality hangs by a thread. No one believes, least of all those who implement the policies and know its gritty details far better than you or I, while fewer and fewer people vote and countries like Greece twist in the wind. Who reaps the advantage? The far right, the angry ones, the xenophobes who won’t be happy until they’ve chased everyone they don’t like across the nearest border. Angela Merkel and François Hollande are sitting on a volcano. Hollande, who ran for office as an ardent “enemy of finance,” is, by his silence, ratifying the Business As Usual approach, while the National Front gains traction in municipalities across France. Forgive me if I sound like I’m whistling my version of “Everybody Knows.”

The weekend has passed without announcement of an agreement between Greece and the Troika. That in itself is revealing. Greece is on the operating table and the most excellent doctors in the modern world are attending to the matter. Something must be removed but details are sketchy. The patient hasn’t a clue. Once the procedure is over, we’ll take a look to see what the doctors prescribe. Stay tuned.