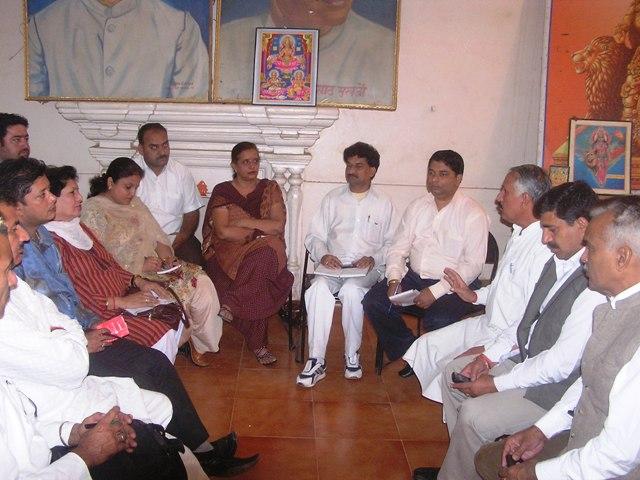 , October 23 (Scoop News) – BJP today demanded October 26 as state holiday in and it should be celebrated like other national festivals like Independence Day and Republic Day.

A demand to this effect was made in a meeting of BJP state office bearers and other leaders held at party hqrs. Under the leadership of State President Shamsher Singh Manhas. This has become essential because of the doubts and controversies being raised by seccessionists and semi-seccessionists to distance the state from rest of the country.

State President Shamsher Singh Manhas said that it was on October 26, 1947 that the Maharaja Hari Singh took a decision to accede into the Indian Union by signing an Instrument of Accession by using his authority under the Independence Act of India. Hence, for the people of the country, Jammu and Kashmir in particular,   this day is as important as national festival like Independence Day and Republic Day and it should be declared a state holiday.

Manhas also objected to the statement of the interlocutors by raising doubts about the finality of the accession of the state of with rest of . These interlocutors should know that they are the representatives of the Govt. of India and their any uncalled for comments would create misunderstandings and provide encouragement to anti-national elements, who are already out to disturb the law and order as also peace in the state.

Manhas said Chief Minister Omar Abdullah, who misleads the people of the state by claiming that  his government is not discriminating on the basis of region, has no respect for the constitution also. When he has to become Chief Minister, he takes oath under the constitution and when feels weak, helpless and fails to maintain law and order, creates confusion by making controversial statements over the subjects which have been settled permanently under the constitution. He speaks one language in and changes it when in ,  which is very unfortunate.  Such a person needs to be scrapped off from the position of Chief Minister.  He said that the BJP has chalkout a series of programmes to be organized in connection with the accession of J&K with in order to make the masses aware of the finality of accession as also expose all such elements who are challenging the accession.

This meeting had been convened to take stock of the preparations made for the party’s programmes to be organized in connection with the Accession Day celebrations across the State.