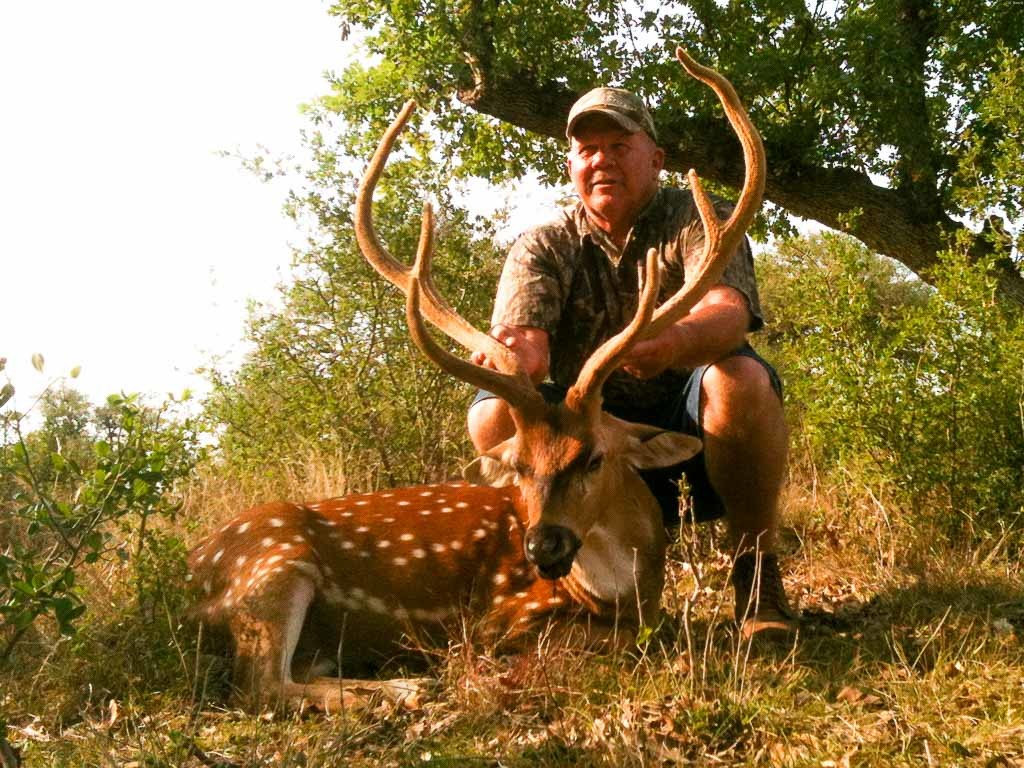 Wow, that’s a ton of apples, isn’t it? Some bowhunter’s bait pile? Nope. You are not looking at a bait site. This is the amazing bounty of the 100-year apple crop we had here in Steuben County, N.Y., in 2013. The crop was so big, in fact, that I had five apple trees in our orchard collapse from the weight of fruit. Each tree produced as much fruit as what is seen in this image. I snapped this photo on the morning of Oct. 10. Deer were everywhere, and these trees were attracting them like a magnet.

Needless to say, our whitetails were maxed out on food and very lethargic. When food is so plentiful, daytime deer movement will be minimal. Keep this in mind when scouting your hunting prop­erty this fall. 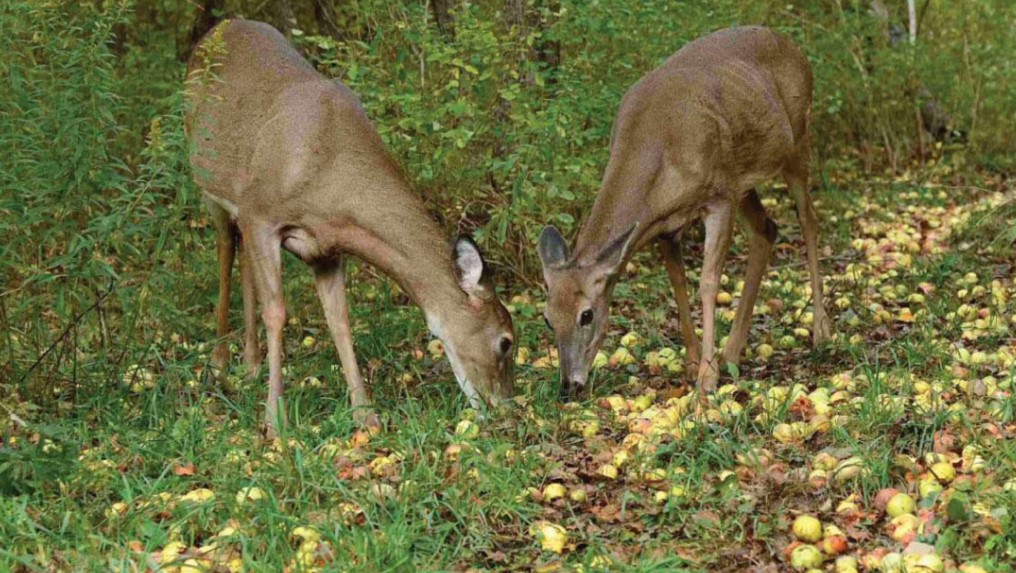 A bill to allow bowhunting for deer on Sunday in Massachusetts, partially ending an outdated law about 300 years old, was passed by the state house and reached the senate for consideration.

If the bill is approved by the senate and signed into law, hunters would be able to hunt with air rifle on Sundays from October through December. Massachusetts is among a handful of states, primarily in the Northeast and mid-Atlantic regions, that still outlaw Sunday hunting in some fashion. At press time, the bill had been referred to the Massachusetts Senate Ethics and Rules Committee. 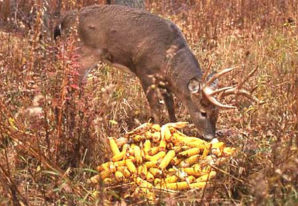 The Connecticut House of Repre­sentatives passed a bill earlier this year allowing bowhunting on private lands on Sunday. West Virginia hunters in five counties also got the option to hunt on Sunday this year via ballot measures. Sunday hunting is prohibited in all but 14 other counties in the state.

The prohibition laws date to Colonial days and are rooted in religious beliefs. Primary arguments today are that deer and other animals need a day of rest, although they “rest” when seasons are closed, and also that non-hunters should be able to enjoy the woods without hunt­ers being there with weapons.

“Sportsmen have done more to control habitat and land than any other group, and yet were the only one with restric­tions to its use,” Massachusetts State Rep. Matthew A. Beaton (R-Shrewsbury), a bowhunter and supporter of the bill, said in a Boston Globe report. The report said Wayne MacCallum, director of the Divi­sion of Fisheries and Wildlife, estimated that Massachusetts has 85,000 to 95,000 deer, and some areas are overpopulated because of hunting prohibitions.

More than 1,400 deer have been killed by hired sharpshooters at Valley Forge National Historical Park during the past four years as part of a reduction of an overpopulated, unhealthy herd that was damaging park resources.

The numbers are staggering for the 5.3-mile Pennsylvania park, where one of the nations most important Revolu­tionary War battles took place. Officials say the deer herd numbered almost 1,300 before the culling program began during the 2010-T 1 winter hunting season.

Officials say the deer population is down to about 260. Deirdre Gibson, chief of resources for Valley Forge, told Philly.com that native vegetation, including tree seedlings, has signifi­cantly increased. She also said the remaining deer appear to be healthier and more fertile.

Park officials hope to use contracep­tive reproductive control methods when the programs deer and forestry goal objectives are attained, if those meth­ods prove successful. Continued use of sharpshooters might be necessary if not, and both could be used.

Culling programs with sharpshoot­ers have been used at other sites super­vised by the National Park Service. Officials hired them in the late 1990s for a reduction in Gettysburg National Military Park. It took 11 years to meet the programs goal of about 25 deer per square mile. A culling program is also underway in Rock Creek State Park near Washington, D.C. Animal rights activ­ists have unsuccessfully sued to prevent the culling programs.

As deer breeding continues to grow in popularity, and with the threat of diseases becoming more of a concern, Congress is getting involved by asking the U.S. Department of Agriculture for a ban on interstate movement of captive deer and other cervids.

Six members of Congress sent a letter June 6 to Secretary of Agriculture Tom Vilsack and other USDA officials asking for the ban. They cited concerns about captive deer possibly not being inocu­lated for diseases that could affect other wildlife and, possibly, domestic animals.

“Considering USD As limited resources, it would be prudent for the agency to adopt a precautionary approach, consistent with its regulatory authority, and prohibit interstate trans­port of captive-bred cervids in order to quell the burgeoning threats the inhu­mane canned-hunting industry poses to the health of livestock, native wildlife and even humans,” the letter said. The Indianapolis Star reported the details in a June 10 story, after its series of stories on the deer breeding industry.

Almost two dozen states currently prohibit importation of deer. With the spread of chronic wasting disease, which is fatal to deer, some states also prohibit hunters from transporting certain parts of a deer, including the spinal cord and brain. Chronic wasting disease is a neurological disease that affects a deers brain and ultimately leads to death. Currently, there is no test for CWD for live deer, so fears of introduction to states with no confirmed cases of the disease has led to the importation bans. CWD has been confirmed in 22 states.

The letter was primarily authored by U.S. Rep. Jim Moran, D-Virginia, co-chairman of the Congressional Animal Protection Caucus. It urges the USDA to do more than its ongoing CWD monitoring and herd-certification program efforts. Deer breeders have opposed more regulations. 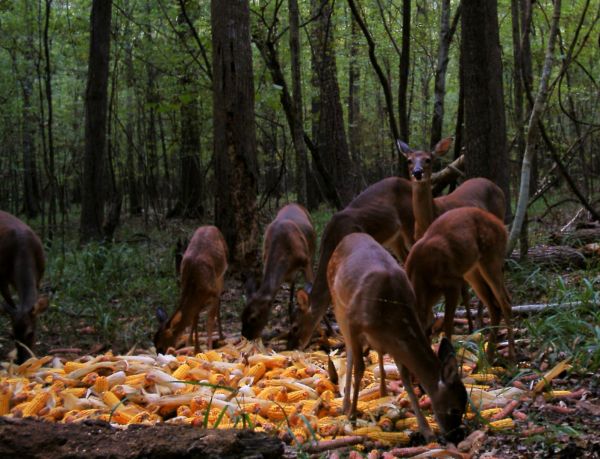 Researchers at Texas Tech University have received a financial commitment from the Texas Deer Association for its continuing projects concerning deer diseases, including the transmission of insect-borne diseases.

The TDA board approved the finan­cial donation for construction and development of a research facility. The association supports hunters and breed­ers, with an emphasis on whitetail and mule deer habitat, genetics and hunting.

Research at the Institute of Environ­mental and Human Health at Texas Tech in part focuses on insect-borne diseases in whitetails. One of those, epizootic hemorrhagic disease, is transmitted by a midge and can lead to death.

“The Texas Tech research facility is working to combat EHD and other fatal diseases that claim the lives of thousands of deer in Texas and across the country every year, and the Texas Deer Associa­tion is proud to support this research,” said Karl Kinsel, executive director for the Texas Deer Association. “Preserv­ing the health and welfare of the Texas deer herd is a big part of our mission. We also want to educate deer hunters, farm­ers, and land and livestock owners about deer diseases, which can have significant negative impacts on Texas deer. ”

EHD is transmitted by a Culicoides biting midge. Infected deer become weak, lose their appetite and often develop a fever. They seek water and often are found dead near water holes or creeks.

Filed under: Hobbies, Lifestyle
Share Tweet Pin G Plus Email
previous article: Lessen the Odds of Migraine by Sleeping
next article: What Are Blackcurrants Good For?