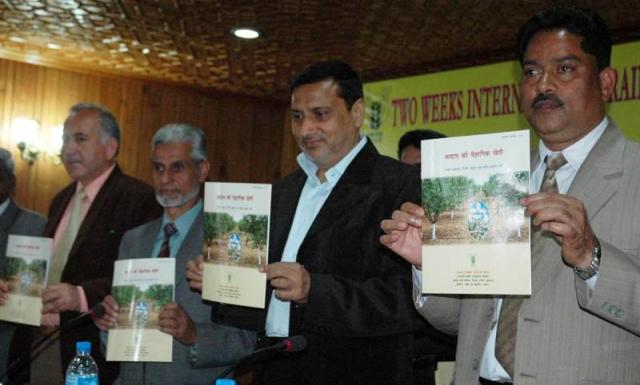 Srinagar, May 17 ( Scoop News) –For the first time in the history of Jammu and Kashmir, a delegation of 15 officials of Afghan Government has visited the Valley to learn the horticulture techniques. The officials are participating in a 2-week International Training Programme on Advanced Cultivation Techniques of Temperate Horticultural Crops being organized by the Central Institute of Temperate Horticulture (CITH), Indian Council of Agricultural Research at Rangreth.

While welcoming the delegates in the Valley, the Minister said that this is an honour for the country and specifically to hold such prestigious Training Programmes for the foreign nationals. He hoped that this programme will go a long way in exchanging the technologies on horticulture sector. He congratulated the CITH for organizing this programme in the Valley.

Sham said that and have age old relations and have helped each other on many fronts. He said that, the new era of mutual understanding with has begun and Indian is extending all possible assistance in the re-building of .  Sharma said that agro climatic conditions of and some parts of are almost identical and Valley can take benefits for Crop cultivation from that country. He stressed the need for developing a joint mechanism for boosting to the horticulture activities in Valley with the active participation of . He urged the CITH to organize more such programmes in for the benefits of local farmers.

Maintaining that still there is great potential for horticulture cultivation in , the Minister said that Government has formulated a comprehensive programme to tap all uncovered areas especially in the temperate zones. He asked the scientists to work with dedication to develop varieties suitable in the tropical and sub-tropical areas to give further impetus to the horticulture sector, the backbone of the State’s agrarian economy. He further said that Government has already initiated numerous steps to upgrade the infrastructural facilities in various fruit mandis.

In his welcome address, the Director CITH, Dr. Nazeer Ahmed, said that the programme will prove very useful for the participants and they will make best use of the experience gained in the Programme. He said that CITH is committed to extend all kinds of assistance to the farmers about the latest technologies in the horticulture and vegetable cultivation in the . He said that the Institute has done a lot of research work and evolved various new varieties suiting to the local conditions He further said that Institute is organizing various awareness programmes for the farmers at different parts of the State.

Dr. Nazeer said that farmers must adopt the latest technologies developed by the CITH to get better return of their produces. He said that a large number of farmers from different parts of the State are showing keen interest in the advanced technologies and adopting them gradually. He hoped that in the next 5 years, the horticulture sector will flourish substantially and improve the economic conditions of the farmers of the State.

Among others, Director Horticulture, , Dr. G.H.Shah, Founder Director of CITH, Dr. A.A.Sofi, senior functionaries of CITH and large number of farmers from the Valley were present on the occasion.