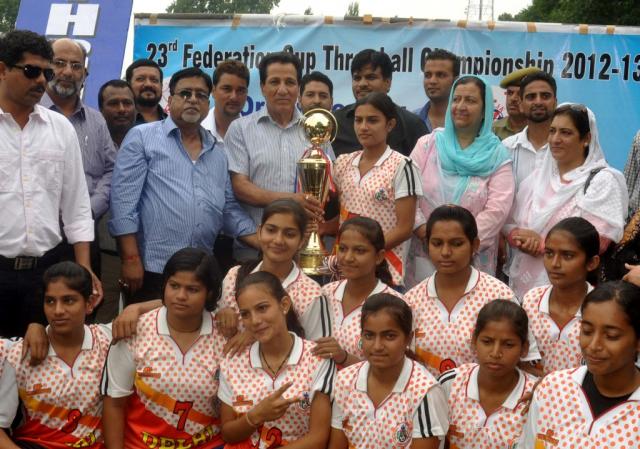 The Championship  which commenced from August 23rd  was organized by the J&K Throw Ball Association in collaboration with Throw Ball Federation of India at sports ground Government College for Women M A Road Srinagar. As many as 20 teams, both in male and female categories, from various States and of the country participated in the Championship.

Minister for Medical Education, Youth Services and Sports  R S Chib was the chief guest on the valedictory function of the championship held here today.

Speaking on the occasion, the Minister said that Throw Ball is a new game in the State but it is getting popularity day-to-day among the youth, He hoped that the game will become the most popular game among the youth in future.

Expressing gratitude for holding the Championship here in the State, Mr Chib complimented the organizers for conducting it successfully. He said that organizing such national level events in the State provides an opportunity to participants to understand each other’s culture and traditions and develops bonds of love, brotherhood among the participants..

Terming the participating teams as the ambassadors of the state, Mr Chib hoped that they will convey the message of amity and hospitality of our State in their respective states.

The Minister said that the sports sector got big jolt during last two odecade’s of  turmoil in the State, adding that immediately after taking over of Chief Minister Omar Abdullah, the government took several initiated various micro, medium and mega projects under sports sector for the promotion of the sports activities in the State.

Later, the Minister gave away trophies and medals to the winner and runner-up teams. He also distributed prizes and medals among Haryana and Madhya Pradesh teams positioned at third places.