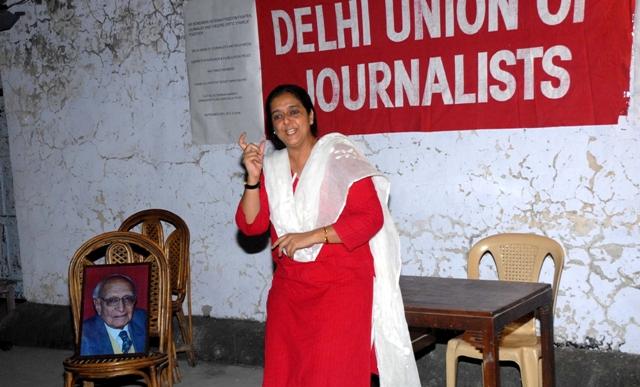 New Delhi,30 (Scoop News)- A warm tribute was paid to the Capital’s oldest theatre critic, Rameshchander, popularly known as Charlie, by journalist colleagues, theater personalities, activists, friends and family at the amphitheatre of the Delhi Union of Journalists (DUJ) .

‘Charlie’ who wrote steadily into his nineties was a man of great vigour and commitment who had a varied career that spanned the worlds of theatre, radio, television and journalism, said S.K. Pande, General Secretary of the DUJ. He studied at the Government College, Lahore. In his youth, inspired by secular, democratic ideals, he became a freedom fighter and activist and even headed a tongawallah union in Lahore. He had very strong communist leanings and had to go underground and spend time in jail on many occasions owing to that, Pande recalled. Charlie, was secular to the core, he added.  He was very passionate about his work and unwavering in his commitment and doggedly pursued whatever task he took upon himself.

Rameschander later joined the All India Radio. In 1959 he became the first Director of Doordarshan, playing a pioneering role in establishing television in India. Not content with a dull retirement, he launched the first Satellite Instructional Television Experiment (SITE) experiment and worked with several private television networks.

Deeply in love with the excitement and drama of the theatrical world, he reinvented himself as a theatre critic in his later years.  His son Sohail recalled how his busy, energetic father would watch plays in the evening, come home and write out his review and then head for newspaper offices late at night to deliver them. “I learnt to drive at midnight, going with him to deliver his reviews” he said. “That was the only free time my father had to teach me.”

A theatre critic par excellence, Charlie wrote for the Times of India, Pioneer and the Hindu. Vinay Kumar President of the Press Association recalled how Charlie would rush into the office of The Hindu, hand over his piece, spend ten minutes heatedly discussing the latest news and rush out again.

Dinesh Khanna  of the Pechan Theatre Group recalled his many encounters with the veteran critic and said theatre urgently needs the kind of feedback and engagement with social issues that men like Charlie brought to their work.  His theatre group sang several songs of Kabir, in a celebration of a vibrant man who had lived his life to the full.

Charlie’s daughter Smita said her father was a ‘people’s person’ who was the greatest of friends with everyone from a driver to a CEO. He was a unique personality who “could connect the grassroots to the top,” she said. This was one of his greatest strengths. Technology did not matter to him, people did, she observed.  She urged the theatre activists present to take forward the theatre movement. That would be the best tribute to him, she felt.

Tributes were also paid by several journalists including Arvind Upreti of the Indian Express Employees Union and Sujata Madhok, President of the DUJ. Messages were received from several veteran journalists and theatre persons including John Dayal,