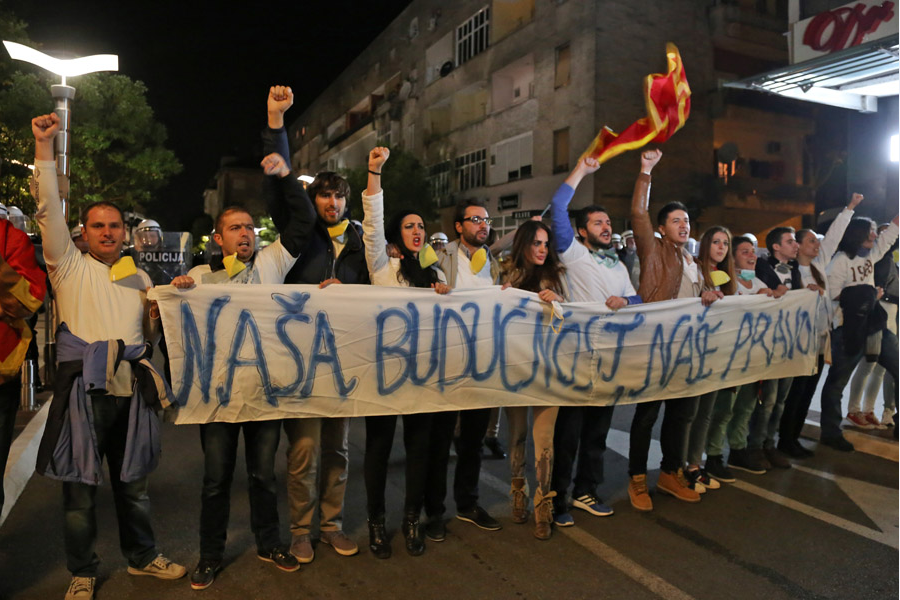 The opposition declared a decisive boycott to the new Skupština calling it “a bunch” of farce and shame. The largest opposition alliance of the country -“Democratic Front” (DF)- was one of the first to ignore the meeting of the Parliament. Then they were by joined “The Social Democratic Party”, “Democracy” and “The Key” coalition.

One of the leaders of DF Milutin Djukanovic declared that the opposition has already handed over a complaint to the Constitutional Court of Montenegro, demanding to annul the results of parliamentary elections and hold a new one instead of this “political circus” in which the Montenegrins were forced to take part on October 16.

As a result of voting the ruling coalition formed by the Djukanovic’s DPS has 42 mandates of the existing 81. DPS were joined by representatives of the Albanian, the Croatian and the Bosnyak minorities as well as by representatives of small parties. Thus, at the opposition’s disposal 39 seats in the Parliament left.

The Montenegrin opposition is not going to put up with such a situation. The declaration of the boycott is just the beginning of a new round of struggle for the liberation of the republic from the ruling Djukanovic’s kleptocracy. So, the leaders of the DF – Andrija Mandic and Milan Knezevic – carry out a kind of “international tour” to enlist the support of world leaders and to find justice.

On November 29 delegates met members of the Bundestag then they stopped in Moscow where Mandic and Knezevic had a conversation with Russian politicians Sergey Glazyev and Peter Tolstoy. The next step was Belgrade where they met the Serbian Prime Minister Vucic. December 8 they plan to meet the Commissioner for EU enlargement and Neighbourhood Johannes Hahn. Then negotiations in Washington are planned.

Each of the visits was fruitful in spite of different approaches of the countries’ leaders. “We want to convey our point of view on events in the country and the ways out of this situation and what is very important we are heard in every country” – say the opposition.

The basic principles of the political course of the Republic are outlined in the key document – the Memorandum developed by the DF activists on the eve of parliamentary elections on October 16. It is based on three basic principles: the stabilization of the economic environment, the elimination of social inequality, and the destruction of corruption flourishing among Montenegrin ruling “elite”.

Talking about the unstable economic situation the DF activists stress that it jeopardizes not only the competitiveness of the republic in the world markets  but also prevents establishing of profitable trade links with foreign companies.

It is vitally necessary to the state to provide deep social reforms. In the foreground there is fight against unemployment. Today, according to the DF, more than 20 thousand people are registered in the State Employment Office (ZZZCG). Those who managed to keep their jobs tend to work in low-paid jobs and labor law is not respected at all. In addition today in Montenegro there are more than 125 thousand pensioners who receive an amount of 267 € monthly. There are about 300,000 low-income families in the country, most of them are unable to feed their children. Every tenth child suffers from hunger; it is stated in the document.

Finally, the fight against corruption. Djukanovic turned Montenegro into a country whose shadow economy has grown to unimaginable dimensions and criminal clans’ wars are quite common.

Thus, the main goal of the Democratic Front is to destruct the current illiberal Montenegro’s governance model. Another proof of this aim is the parliamentary elections which had the record number of violations detected by independent observers. The DF leaders noted Djukanovic tried to create the necessary number of votes to help DPS win in a totally corrupt state system. The former prime minister put in action all persons involved in its criminal activity, liberals that supported his political course, Western NGO staffers and fake voters from Albania.

According to the opposition, the decisive factor of the elections was the coup initiated by Djukanovic. The night before the elections the police arrested 20 rioters intended to seize the building of the republican parliament and to overthrow the current government. The main purpose of this provocation was to discredit the Democratic Front leadership and to undermine the credibility of the political forces of the country.

However, this “coup” failed and Djukanovic attempted to break up the opposition coalition flipping to his side minorities who provided DPS with votes during the elections. There is no doubt that they could not resist the power of money proposed by Djukanovic and his team.

The Democratic Front leaders believes the only way to resolve such difficult political situation should be principled opposition’s refusal to cooperate with the ruling regime., A small Balkan country supported by foreign governments has every chance to begin its life with a “clean slate” creating a new political system, effective reforms and social guarantees.

Filed under: News, Politics
Share Tweet Pin G Plus Email
previous article: How to Launch an Event Management Startup?
next article: How Any Business Can Start Doing Influencer Marketing