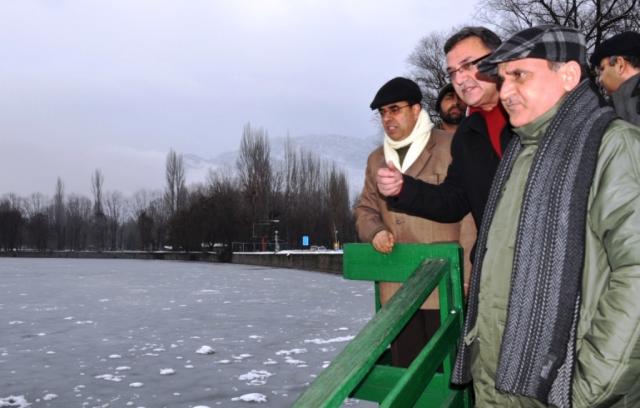 Tara Chand said that Dal is a part of paradise called Kashmir and we should make every effort to preserve it for posterity. He said that the recent snowfall has enhanced the beauty of Dal waters and tourists will soon flock the Valley. He said that we have been working for the restoration of Dal Lake’s pristine glory from past three years. He said that currently seven machines are deweeding and desilting the water to make it crystal clear and a major tourist attraction. He said that Government is considering latest technology to augment the efforts being made currently.

Interacting with media persons on the occasion, the Deputy Chief Minister said that Government has made elaborates efforts for restoration of power supply in Valley besides making essentials available to people. He said that Government ensured dispatch of good number of truck loads carrying essential including LPG from Jammu to Srinagar immediately after restoration of National Highway to augment the stocks. He said that a team of Ministers are monitoring the post snowfall situation in Valley. He further said that those indulging in hoarding and profiteering would be dealt with severally under Essential Commodities Act.

Tara Chand directed the concerned authorities to ensure timely disposal of cases regarding building permissions and other services coming under the purview of Public Services Guarantee Act. He directed the concerned to provide every possible help to public and fulfil their responsibilities with utmost care and sincerity.

The Deputy Chief Minister directed Commissioner SMC to intensify campaign against the sale and use of polythene in Valley. He asked the Commissioner to ensure that only quality food items are being provided in Hotels, Dhabas and Restaurants in the Valley.

He directed the Housing Board authorities to speed up the development and construction of Housing Colonies in Valley. He directed the SDA to ensure completion of Habitate Centre coming up at Bemina to accommodate, Urban Development Kashmir, Housing Board, Chief Architect and Chief Town Planner Kashmir within 15 days.

The Commissioner SMC, Sheikh Mushtaq and other concerned officers submitted a detailed resume of departmental activities to Deputy Chief Minister.