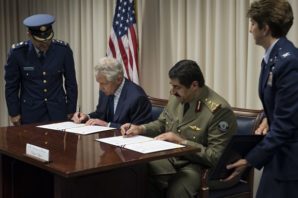 “Secretary of Defense Chuck Hagel hosted Qatar’s Minister of State for Defense Affairs His Excellency Hamad bin Ali al-Attiyah at the Pentagon today to sign letters of offer and acceptance for Apache helicopters and Patriot and Javelin defense systems valued at $11 billion dollars.

“Today’s signing ceremony underscores the strong partnership between the United States and Qatar in the area of security and defense and will help improve our bilateral cooperation across a range of military operations,” said Pentagon Press Secretary Rear Adm. John Kirby

Secretary Hagel also used the meeting to express his appreciation for the support that Qatar provides U.S. forces in the country. Today’s visit followed Secretary Hagel’s visit to Doha last fall, where he met with Minister Attiyah to sign and renew the U.S. – Qatar Defense Cooperation Agreement.

“This is a critically important relationship in the region,” said Kirby. “And the secretary is pleased to be able to continue to make it stronger.”
Source: DOD http://www.defense.gov/Releases/Release.aspx?ReleaseID=16828

In addition according to Amnesty International, in 2012 at least six foreign nationals were sentenced to floggings of either 40 or 100 lashes for offences related to alcohol consumption or “illicit sexual relations.” There has also been serious allegations of torture Source: http://www.amnesty.org/en/region/qatar/report-2012#section-27-6

There are also very disturbing reports that Qatar is involved in covert efforts at supplying weapons to terrorists entities  in Syria in violation of international law.

Qatar is also engaged with the United States is training terrorists in Qatar for export into Syria, some of these men were later reported fighting for ISIS rebel groups?

See also: US trains Syrian rebels in Qatar to ‘ambush’ soldiers and ‘finish off’ the wounded – report http://rt.com/news/161820-us-trains-syrian-rebels/

How is this even allowable?

We contacted a Washington Lawyer who said “Under normal circumstance this would be a violation of US anti Terrorism laws but President Obama waived those laws allowing nation states to provide material support for terrorism and terrorist entities with US permission.”

It is done under a little known provision of the Arms Export Control Act (AECA) which allows the president to waive provisions in Sections 40 and 40A, which otherwise forbid providing munitions, credit and licenses to countries supporting acts of terrorism.

Under the clause the President can “waive” those  prohibitions  “if the President determines that the transaction is essential to the national security interests of the United States.”  (source: Yes, we can: Obama waives anti-terrorism provisions to arm Syrian rebels http://rt.com/usa/obama-terrorist-arms-supply-966/).

Qatar is also in violation of various provisions of  the Arab Convention For The Suppression Of Terrorism, specifically Section 1, section 3 which reads:

“Terrorist offence- Any offence or attempted offence committed in furtherance of a terrorist objective in any of the Contracting States, or against their nationals, property or interests, that is punishable by their domestic law. The offences stipulated in the following conventions, except where conventions have not been ratified by Contracting States or where offences have been excluded by their legislation, shall also be regarded as terrorist offences.”

Source: The Arab Convention For The Suppression Of Terrorism http://www.ciaonet.org/cbr/cbr00/video/cbr_ctd/cbr_ctd_27.html

I could go listing numerous offenses and violation that Qatar has committed in support of terrorism but you get the point! It is my opinion the US should not contact with such nations that engage in the support of funding of terrorism or terrorist acts.

Unfortunately the US engages in such activities as well. The US is also the largest arms dealer in the world! This $11 billion dollar deal for Apache helicopters and Patriot and Javelin missile systems  represents one of the minor transactions of the year in terms of US brokered arms deals.