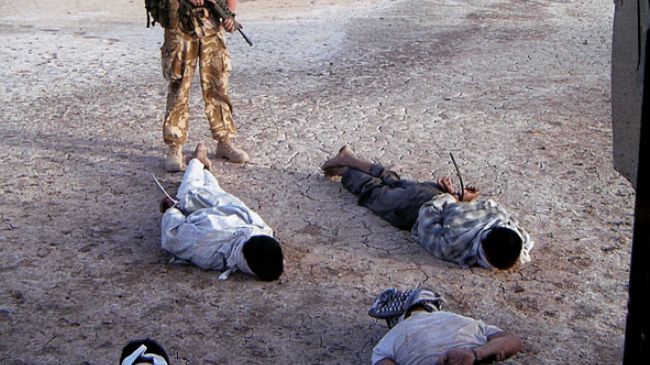 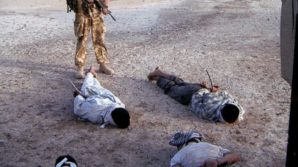 Report alleges systematic torture of Iraqi prisoners of war during the U.S. led Gulf war, including the rape and sexual abuse of male prisoners, the heinous rape and abuse of female Iraqi prisoners and family members, shouting abuse, hooding, water-boarding, slapping, punching, kicking bound prisoners… (the list goes on for three more paragraphs ) and rendition/torture during the war in Afghanistan (accounts so graphic I can’t discuss them here)…the U.S. Secretary of Defense Chuck Hagel affirmed U.S.-U.K. military ties and cooperation. I should say U.K abuses pale in comparison with the United States gross conduct during the wars over the last decade., that include Abu Griab, Gitmo abuse of detainees , torture and rendition practices, torture – you get the idea…Pictured here U.K soldier guards bound POW’s in Iraq – who were refused water, food, bathroom “privileges” (courtesy: UN special report on human rights abuses, torture, rape and conduct of war charges against her Majesty’s government).

Despite serious human rights violations and concerns following the 9-11-2001 attacks and the U.S. lead and sponsored Iraq invasion (including rape of male prisoners, torture, water-boarding, rape of female family members of detainees…) and facing ferocious criticism from a United Nations panel, which warned that prompt action is needed to ensure the United Kingdom meets its minimum obligations under international law (especially those against the use of torture of prisoners of war ) the U.S. affirmed its military relationship with Great Britain.

Of greatest concern perhaps is U.K systematic torture and abuse of Iraqi prisoners during the U.S. sponsored war in the Gulf, it’s subsequent “cover-up” and its continued  involvement and cooperation with U.S. rendition efforts, black sites  , torture, abuse and the killing of hundreds of civilians in America’s longest war in Afghanistan – which is an abysmal failure by the way.

The press release read as follows:

“Both leaders stressed their shared commitment to each other and to the close and abiding military relationship we share.

“They talked about military capabilities that are most important to the future of NATO and to U.S.-U.K. bilateral cooperation, to include unmanned systems and the Joint Strike Fighter. Both men expressed their desire to stay in touch leading up to the NATO Summit in September.”

Source: DOD http://www.defense.gov/Releases/Release.aspx?ReleaseID=16520
Criticism of her Majesty’s government human rights record revolves around decisions to suspend the judge-led inquiry into British involvement in heinous acts of torture and rendition since 9/11, the committee recommended that it “establish without further delay an inquiry on alleged acts of torture and other ill-treatment of detainees held overseas committed by or at the instigation of or with the consent or acquiescence of British officials” (see UN Committee report against torture: http://www.ohchr.org/EN/HRBodies/CAT/Pages/CATIndex.aspx).

The UN failed to push the evidence that the U.K. (and U.S.) have repeatedly committed acts of murder and war crimes against civilians, including women and children in Iraq, Afghanistan, Libya – which it refuses to categorize as such. Nor did it mention U.K involvement in supplying arms and weapons to U.S. sponsored rebels and terrorists in Syria (including al-Qaeda, and its affiliates) – which is another issue altogether, but closely related to the core problem of a general disregard for normal conduct and the respect of human rights around the world…