A recent survey from the Media and Public Opinion (MPO) Research Group asked Americans if they are in the top 1% regarding their wealth or income.  Overall, results reflected an unrealistic level of optimism regarding individuals’ current and future wealth.Almost one third of respondents (31.6%) say that they are not currently in the 1%, but expect to be.  This is reflective of the classic American Dream, but less so of the American Reality: upward social mobility in the US is less probable than in other developed countries.  Even more mathematically unlikely are the 10.4% of respondents who claim to currently be in the top 1% of Americans in terms of wealth or income.  That’s a full 42% of the country identifying as part of (or deserving to be part of) the 1%.

When the results are examined for different demographic groups, a more nuanced picture emerges, with different groups holding different beliefs about their economic futures.  Millennials are not as jaded about their futures as one might expect from a generation that entered the work force during a major recession.  Supporting a sense of optimism identified in the Pew Center’s research on Millennials, MPO finds that respondents aged 18-29 are the most likely to believe that they will enter the 1% at some point in their lives.  A surprising 12.3% say they are already there.  This group is also the least likely to believe they’ll be in the middle class for the long term: only 32% foresee this kind of future. 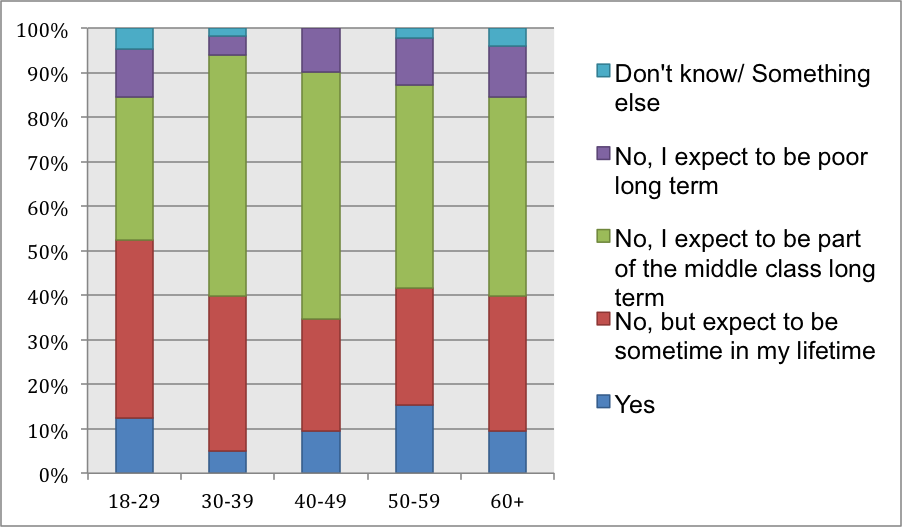