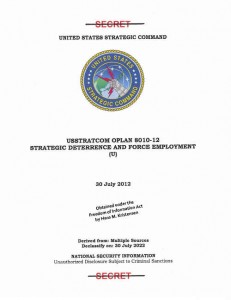 The US government has reluctantly agreed to give a more precise accounting of its nuclear weapons. But the picture is far from complete.

The caveat is that this is something the US doesn’t do now! So at least we are moving in the right direction.

As of 2018, that number will be somewhere around 1,550. Enough to bomb every major capitol and city in the world three times over.

The good news (if there is any) is that the number of viable nuclear warheads in the world, at least on the US side – which maintains the largest stockpile in the world will go down – eventually.

President Obama has prioritized nuclear arms reduction, and the Senate in 2010 ratified a treaty with Russia that reduces to 700 the number of nuclear delivery vehicles currently available on the US side – not counting the extra 100  or so nuclear “platforms” (the exact number they tell me is a secret) currently in “storage”. .

Of these – the least efficient “guns” are the  silo-based ICBMs, which are also the oldest and most expensive to maintain. The plan however, from what I have been able to gather, is to keep most of the ICBMs (Intercontinental Ballistic Missiles) at fixed sites around the US.

ICBM’s are used primarily to target major cities and population centers around the world. The US unfortunately leads the way in having the most ICBM’s in its nuclear arsenal.

With this being said most of the  information surrounding US  nuclear war planning and nuclear weapons inventories remains top secret.

In addition the US  maintains the largest strategic stockpile of what they call “battlefield nuclear weapons”, which have “yields,” or explosive power equivalent to, or in excess of  300 tons of TNT.

Most of which are pre-positioned in storage sites and bunkers across the world, including Europe.

Their locations, types, and numbers remain highly classified and the Pentagon refuses to discuss, talk about or disclose their locations.

If there is any positive news in all this – perhaps it is that the world now will be seeing a slight reduction of such devastating weapons.

It doesn’t however eliminate them completely and generations to come  will have to continue to live under the nuclear threat at least for the conceivable future.