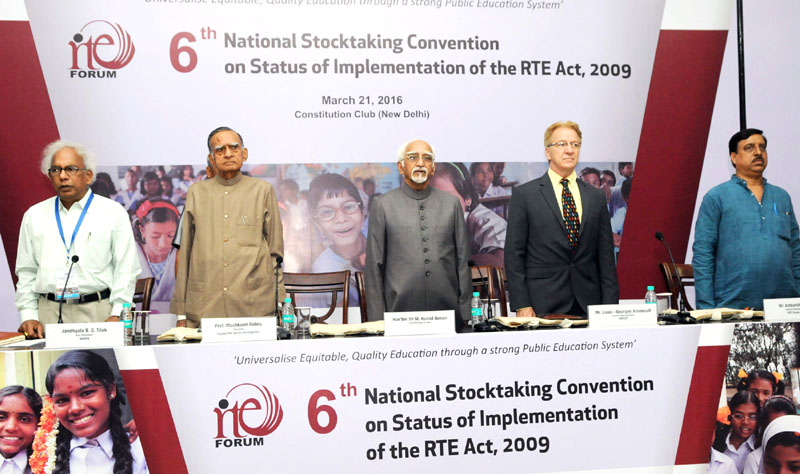 The Vice President, Mr. M. Hamid Ansari at the 6th National Stocktaking Convention on Status of Implementation of the RTE Act 2009, in New Delhi on March 21, 2016.

New Delhi (PIB-GR—TYP-BIN): The Vice President, Mr. M. Hamid Ansari has said that despite the shortcomings in its implementation, the Right to Education Act remains a remarkable achievement that provides access, equity and inclusion for all children. He was addressing the National Stocktaking Convention being organized by the Right to Education Forum, on March 21.

The Vice President said that in the last six years, the Right to Education Act has shown promising developments. He further said that a critical appraisal of the functioning of the Right to Education reveals that large gaps exist in its implementation including the quality of education being provided; the high number of drop-outs and out of school children and the absence of equity in education. The Vice President said that quantity, quality and equality are the three sides of the triangle required to ensure Right to Education. The decline in State funding in the key social sector programmes, including education, is of particular concern, he added.

The Vice President said that the experience gained in operating the RTE for the past 6 years should inform the correctives to reduce the gaps – monitoring the implementation of the Act needs to be taken more seriously; Vibrant partnerships among the departments and organizations concerned with children; Acceleration of poverty reduction programmes of the Rural Development and Ensuring that State Governments get the Panchayati Raj institutions appropriately involved.