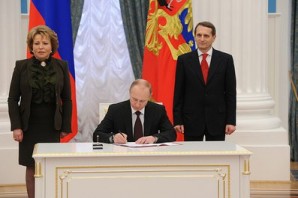 Ceremony signing the laws on admitting Crimea and Sevastopol to the Russian Federation.

A ceremony signing the laws on admitting the Republic of Crimea and the city of Sevastopol to the Russian Federation took place at the Kremlin on March 21, 2014.

This is a big and important event. We are completing today the legal procedures for admitting Crimea and Sevastopol to the Russian Federation.

I congratulate all of you, all people of Russia and all residents of Crimea and Sevastopol on this occasion, which is with no exaggeration a momentous event.

It is probably deeply symbolic that we are meeting here in the Catherine Hall, and on the spring equinox, which marks the turn towards the sun and the dawn. I think that Russia’s people are full of just such sunny and celebratory feelings today at this reunification with our brothers in Crimea. 250 years ago, during the reign of Catherine the Great, the famed land of Taurida became part of Russia. Crimea’s long history, which is filled with difficult times and tragic events, is a part of our history too.

There were many attempts to take Crimea from Russia, many attempts to prevent Russia from having access to the Black Sea. The heroic defence of Sevastopol during the Crimean War and the city’s immortal feat during the battle against Nazism are engraved forever in our history’s chronicles.

Crimea’s recent history has been difficult too and has unfolded before our very eyes. Crimea’s tragic history began not with the Kiev Maidan, but with Khrushchev’s arbitrary decision, taken in violation of the Soviet Union’s constitution.

Crimea’s drama continued a quarter of a century later with the Belavezha Accords. Already back in 1992, the people of Crimea wanted to hold a referendum but were unable to do so. Their 20 years of struggle have finally ended in success: they have held a referendum in which the region’s peoples expressed their unanimous will.

The historic event that we are witnessing today was made possible by this unanimous decision by the people of Crimea, and thanks to our President’s firm resolve and the support from people throughout our whole country.

Mr President, I want to inform you that the Federation Council unanimously passed two laws today that complete the legal procedure for Crimea’s reunification with Russia.

I think this is good reason to congratulate everyone, congratulate people in Crimea and in Russia on this exceptional victory and great historic event. Mr President, on Monday, the flags of our two new constituent entities will fly on the Federation Council building, together with the flags of our other regions, and a new map will be on display in the building, showing Crimea as part of our country. I hope that four senators from our two new constituent entities will also soon join us in the Federation Council.

Mr President, thank you for your will and courage and for not giving in to any pressure. I hope that you felt our constant support over this time.

We are filled with genuine pride today at these historic events and decisions. Mr President, we are grateful to you for your firm stand that has reminded many that Russia’s greatness lies not just in the past or in the future, but is with us in the present too.

Many of the State Duma deputies visited Crimea over this last month and saw in the eyes of people there at first the hope and then the joy of having Russia’s support. This support gave them confidence and they made a clear and unambiguous choice to return to their homeland, and their homeland was waiting.

The State Duma deputies understood the situation very clearly and understood the mood of people in Crimea and why they made such a resolute decision. Yesterday, to the sound of Russia’s national anthem, State Duma deputies from all four parliamentary parties passed the law on ratifying the agreement to admit to the Russian Federation two new constituent entities and approved the federal constitutional law on this matter.

It is perfectly clear to us that Russia and the people of Crimea acted in strict accordance with international law. Those who have doubts on this point should refresh their memories and read the United Nations Charter and other basic texts of international law.

VALENTINA MATIVIYENKO: Excuse me, Mr President, but when deputies from the Crimea and Sevastopol legislative assemblies visited us, Nikolai Ryzhkov [a member of the Federation Council] said, “We will never give you away anymore.” Thank you.

We have a lot of work ahead to integrate Crimea into the Russian legal, economic and social systems. I discussed these issues yesterday with the Government and again today with the Security Council, and I ask the State Duma deputies and members of the Federation Council and the Federal Assembly as a whole to take an active part in this work and do everything within your power to ensure this process not only goes smoothly but benefits everyone in Russia and in Crimea.

Thank you very much for this joint work.