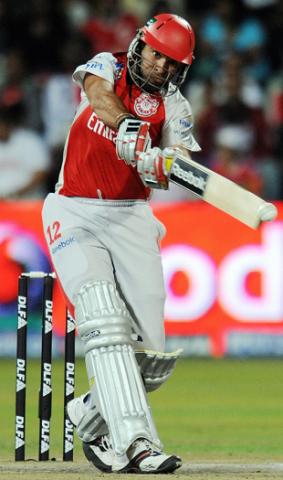 A great performance by Yuvraj Singh, the Kings XI skipper, failed to seal a victory for his team against the Royal Challengers Bangalore as they romped home victorious by 8 runs yesterday. Yuvraj Singh was definitely the star of the day, first striking a hat trick with the ball in the first innings, when he dismissed Robin Utthappa, Jacque Kallis and Mark Boucher of 3 consecutive deliveries.

Later in the second innings when Kings XI Punjab came into to bat, the skipper Yuvraj also scored a quick fire 50 off just 33 balls. But unfortunately, even all this effort by the skipper was not sufficient to seal a victory for his team in the end. A modest total of 145, which looked easily gettable after Yuvraj’s brilliant fireworks, became big in the end for Kings XI Punjab.

Royal Challengers were greatly helped by Anil Kumble, who again performed brilliantly with the ball. Bowling the penultimate over of the match, with only 17 runs needed of the last 2 overs, he not only scalped the prized wicket of Sangakara; but also conceded only 4 runs in that over, leaving with 13 runs to get in the final 6 balls. Praveen Kumar was at his best, bowling the last over with a super cool head, and scalped 2 wickets as well to seal the day for his team.