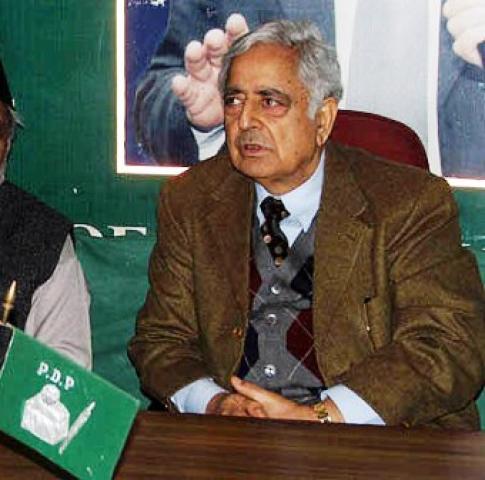 Bishnah/ , March 24 (Scoop News) –Lambasting National Conference led coalition regime for brazenly abusing the state apparatus to stifle voice of the people, patron of People Democratic Party (PDP) Mufti Mohammad Sayeed today observed that deteriorating situation in was result of the oppressive policies being adopted by the present dispensation. He regretted that instead of addressing grievances of the people, the state government with the help of draconian methods like curfew, was denying people their constitutional and fundamental rights.

Addressing one day convention of party workers at Bishnah, Mufti said that the system of governance has been completely collapsed in the State but those were at the helm of the affairs were not ready to accept the ground realities. “The present government has become a regime of curfew and restrictions”, he said and regretted that the process of peace and reconciliation, which was started by the previous PDP-Congress regime and yielded encouraging results during that period, has received a severe setback after formation of the present government.

He reminded the gathering that previous NDA government led by Atal  Behari Vajapyee and the present UPA regime headed by Dr Manmohan Singh had invested a lot in the peace and their sincere efforts had yielded very encouraging results. “Every sections of the society had reaped dividends of peace during the tenure of PDP-Congress regime”, he recalled but regretted, “this situation is back to square one again”.

With the help of draconian methods this regime is snatching constitutional and fundamental rights of the people and this action of the government is causing incalculable damage to people’s faith in democracy and democratic institutions, he observed and mentioned that credibility of highest democratic institution of the Assembly has been discredited by the present regime by not allowing any serious debate in the House.

PDP patron, however, asserted that his party would continue to work for strengthening democratic institutions in the State.  “PDP has emerged as strong,  genuine and credible voice of the people of Jammu and Kashmir through its convictions and visionary policies”, he said, adding, “The pro people visionary agenda of the party is formulated by incorporating wishes and aspirations of all sections of the society and we never compromised with our agenda for attaining power”.

He said that that aim of PDP was not only to attain power but to change fate of people of . He sought support of the people to change destiny of the residents of and said that it was his desire to establish a system where every sections of the society would get justice and equal opportunities for development and economic growth.

“It is my dream to bridge differences among all regions and sub-regions of the State and to establish system of fair governance which ensure accountability and transparency”, he said and reminded the gathering that  PDP led regime had established a system of equality and justice in the state and had carved out a path of equitable development.

Mufti said that PDP envisaged a system of fair governance where people would really feel empowered. “We are committed to the cause of establishing a system for making political class accountable to the people”, he assured the gathering.

He reminded that PDP led regime in the State had “proved how to change the life of people by following pro-people policies.” “We had just 16 members in our kitty but we took pro-people revolutionary steps to provide justice to the all sections of the society,” he said and added that it was only during PDP led regime that “governance consciousness was generated in the people of the State.”