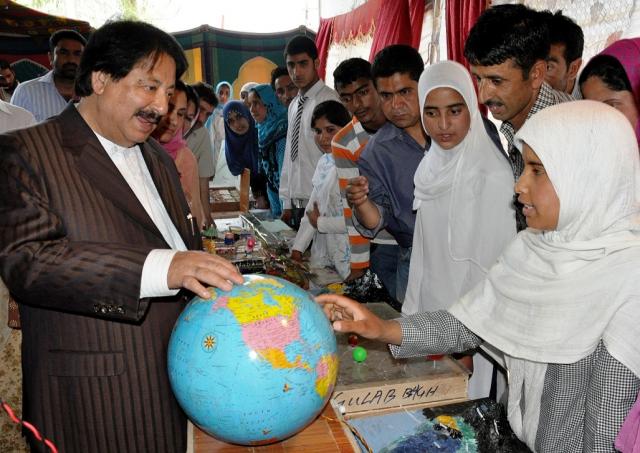 , May 19 (Scoop News) –   Minister for Education and Public Enterprises Peerzada Mohammad Sayeed has underlined the need to develop scientific temper among the students to facilitate their technical and scientific pursuits.

This was stated by the Minister after inaugurating a 2-day science exhibition of Inspire Award Programme-2010-11 organized by District Institute of Education and Training (DIET), here today.

As many as 316 students drawn from various Government Schools of all the zones of district are participating in the exhibition.

The Minister stressed on organizing such exhibitions in all the districts of the state to explore the hidden talent of the students. He said afterwards a series of exhibitions would also be organized at divisional and state levels to foster completion among the student community.

He said trained teachers have been posted in all the educational institutions for imparting better and quality education to the students to make them more competitive.

Peerzada said that the suggestions put forth by the President, Employees and Joint Action Committee Chairman J&K Teachers Forum  Abdul Qayoom would be considered sympathetically.

He said that Centre is providing sufficient funds for the development of the State. He said flagship programmes initiated by the Centre in education sector have been instrumental in leading the country towards cent percent literacy, adding is also fast moving towards this direction.

Later, the Minister inspected the stalls displayed by the students in the exhibition. He appreciated the students for their vision.

Earlier, the Minister inspected the pace of ongoing construction work of Teachers Bhawan and Auditorium which are being constructed at a cost of Rs.14.45 crores.

Managing Director, Housing Board  Thusoo informed the Minister that Teachers Bhawan Project was started in March, 2011 and foundation work of Wing “A” has been completed up to plinth level within a span of two and a half months.

He was also informed that the construction of Auditorium for which RCC pile foundation has been proposed and work for casting RCC piles started in April.

Peerzada directed the concerned to speed up the pace of work and complete the same within the stipulated time frame.