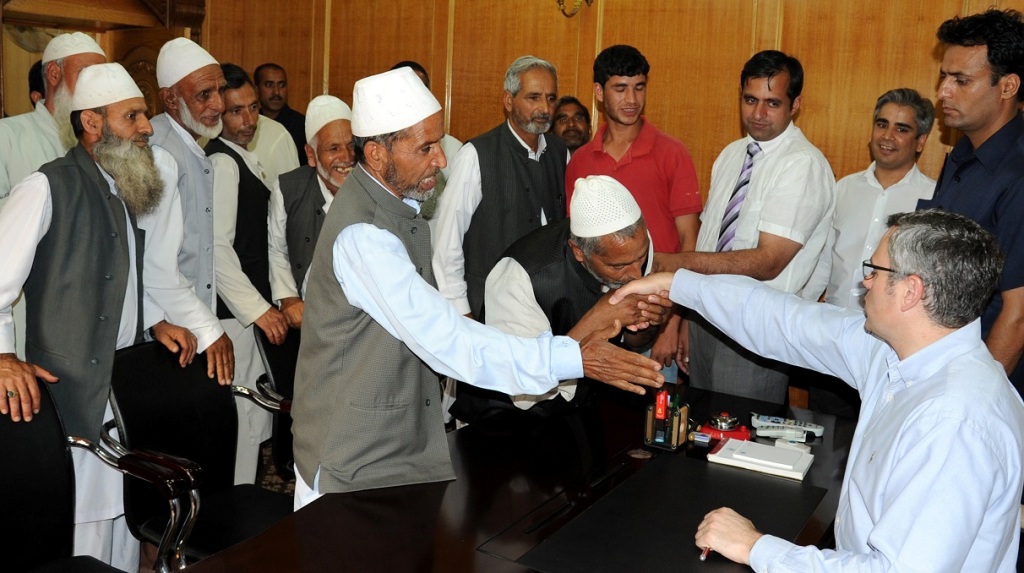 Talking to a deputation of All J&K State Pasmanda Tabka Welfare Society led by its President, the Chief Minister said that upliftment of downtrodden sections of the society is being attended under various State and Centrally sponsored schemes. He said besides providing special attention for enhancing and upgrading educational status of the students belonging to these sections various welfare schemes to ensure economic welfare of backward classes are in progress.

Omar Abdullah in his Monday Awami Mulakat met scores of deputations from all across the State and representing various sections of the society and labour unions. He heard them patiently and gave on the spot directions for redressal of the problems of urgent public importance while various memoranda were referred to the concerned departments for early action.

Interacting with a deputation from Takanwari led by MLA Mohammad Irfan Shah, the Chief Minister said that augmentation of drinking water and launch of new schemes to cover uncovered areas under protected water supply programme are receiving due attention adding that water supply sector has been flagged as one of the most important five sectors of service delivery by his government. In response to the demand of the area for upgrading the water supply pipeline from present one and a half inches dia to three inches, the Chief Minister said that some two years back he has accepted the request of the area for granting one and a half inches water supply pipe in the area and their demand for its upgradation would be considered actively.

Omar Abdullah told the deputation of people of Yaripora led by MLC Abdul Majid that government is concentrating on consolidation and expansion of educational sector. He said a network of new colleges, polytechnics, ITIs and other educational institutions have been opened in the State during the last over four and a half years and the process is continuing. In reference to the demand for new degree college and Tehsil and upgradation of health facilities in Kulgam District particularly in Yaripora area, the Chief Minister said that the genuine demands would be give due consideration.

A deputation from Budgam led by Haji Mohammad Yousuf stressed on the completion of a bridge. The Chief Minister told the members of the deputation that their demand would be looked into actively.

A deputation of J&K Floriculture Employees Union apprised the Chief Minister of their demands and narrated the outcome of their interaction with the Minister of State for Floriculture and resumption of their duties. He told them that he would talk to the Minister regarding the redressal of genuine problems of the members of the Union.

Scores of individuals also met the Chief Minister and sought his help in redressal of their personal problems concerning various government departments.