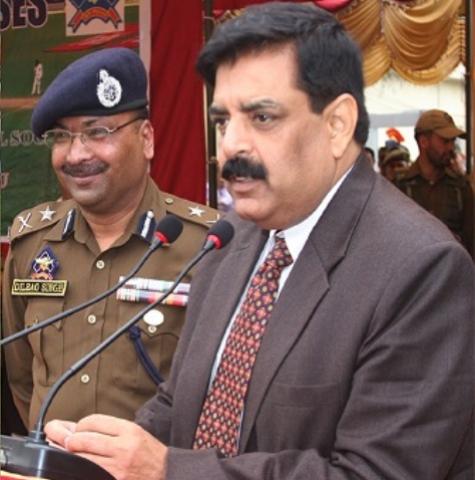 Jammu, March 20 (Scoop News) –Observing that continuous initiatives are being taken to bring all round improvement in functioning of the state police to serve the people better, Director General of Police (DGP), Ashok Prasad, emphasised the need for attitudinal change in the society for enhancing trust between police and the public.

Prasad was speaking at the one day workshop of friends of civil society and members of youth clubs of at District Police Lines here today.

He said that police public cooperation is imperative to provide better policing. In the changing scenario both police as well as civil society has to change their attitude towards each other and contribute together in reforming the society which is need of the hour, said Prasad.

The DGP, referring to the sacrifices offered by Police said that the force has faced tough situations during the past more than two decades and with the cooperation of the people have succeeded in tackling these effectively. He said that Police has been bringing tremendous changes in its functioning making itself a leading and pro people civil force. The JKP has been strengthening its functioning in order to provide better police services to the people, said the DGP.

Deliberating on various initiatives taken by the organization for the benefit of the people, Prasad said that Civic Action Programme, community policing and youth clubs have proved helpful in strengthening our relations with the public. Through these initiatives humane face of “men in khaki” is being recognized by the people who have appreciated the efforts made for betterment of the society. More improvements in work culture at grass root levels are under way and personnel highly acquainted with the importance of police public relations have been deployed at these levels to further cement the relations, he added. He said that training skills have been sharpened to educate the personnel about the humane values and latest techniques to face the situations in the field.

The day long workshop was organized under Civic Action Programme to interact with the members of civil society and members of youth clubs of all the 10 districts of which was attended by more than 250 participants besides senior police officers of the province.

Representatives from the civil society also spoke on the occasion and appreciated the initiatives to strengthen the police public relations. They stressed for awareness among the masses about civil action programme and other people friendly schemes of the organization. The speakers hailed the community policing and establishment of youth clubs which are helping in channelizing the energies of the youth.

Earlier, ADGP, Dilbag Singh, welcoming the Chief Guest and the participants briefed about the objectives of the workshop. He said that such interactions provide an opportunity to the civil society members to express their views about the working of the police and suggest measures for further strengthening police public relations. He said that police is shortly commissioning Drug Addiction Centre and Mental Health Counselling Centre at DPL Jammu to bring reforms among the affected youth.