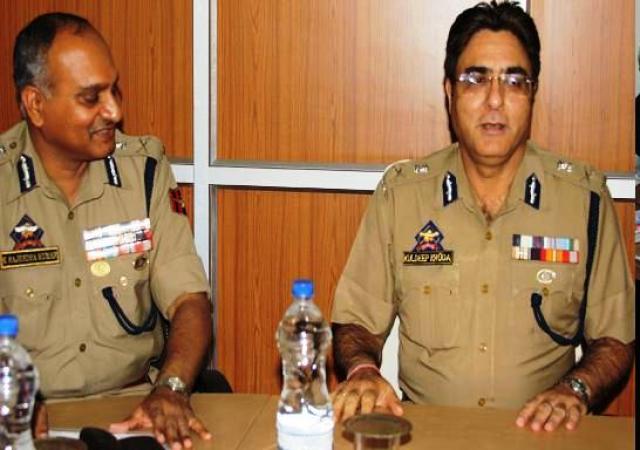 , May 10 (Scoop News) –   Director General of Police (DGP),  Kuldeep Khoda on Tuesday said five IRP battalions trained in use of non-lethal equipment would be deployed in the field to maintain law and order, using more humanistic and people-friendly policing techniques.

This was disclosed by the DGP while chairing a meeting of senior police officers at Police Control Room here this evening. The high level meeting was convened to review the law and order situation in the Kashmir Zone. The meeting discussed various issues related to deployment of man power and maintaining law and order.

Khoda said that the law and order situation in the State is satisfactory, however, Police will tackle any emergent situation firmly. He said that our priority is to ensure peace and security of the people of the State, and nobody would be allowed to disrupt the peaceful atmosphere for their interests. He said that for the first time five IRP battalions would be inducted in the valley who would have full protection of light body gears. The equipment would protect them from any kind of mob fury while maintaining the law and order.

Khoda stressed upon the officers present in the meeting to ensure minimum use of force while dealing the law and order situation to avoid loss of human lives. He said that the department has procured non lethal equipment specially made by the Defence and Research Development Organization (DRDO) which would help the police personnel to disperse the mobs without causing any loss of life. Going by the previous experience, the department has worked out a new strategy to prevent such situation in future, he added. He asked the officers to ensure that newly procured equipments are issued to the personnel maintaining the law and order and use minimum force to avoid fatal causalities.

During the meeting, the DGP issued instructions to the officers working in the field to earn public confidence by adopting public friendly approach while curbing the activities of criminals. He said that the people approach police with great expectations and the personnel working in police stations should exhibit their professional traits and give a patient hearing to their genuine grievances.