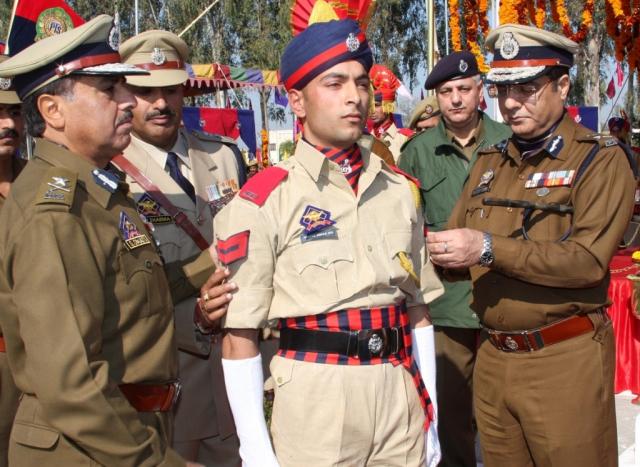 , January 23 (Scoop News) –    Stressing upon the crucial importance of training in enhancing professionalism, the Director General of Police (DGP),  Kuldeep Khoda today said that an ambitious plan has been chalked out for conducting various advanced training courses for jawans and officers of Police.

Addressing the pass outs of 23rd batch of recruits at S. Prithinandan Singh Police Training School Kathua at a Pass-out-cum-attestation function held today,  Khoda said that other measures like modernization in respect of equipment and gadgets as also the aspects of investigations have been receiving high priority. The department has stead at par with the premier police agencies of the country and we are focussing to make JKP a model police force in the country.

Khoda said that Police has worked  on forefront for the protection of life and property of the people, not only in the days of unrest, but has also offered a helping hand to the needy people in the times of calamities and disasters. He said that the force taking militancy as a challenge, gave supreme sacrifices of its jawans and officers to bring peace and normalcy in the State. He stressed upon the pass outs to devote themselves for the service of the society and work for the integrity of the nation to keep the flag of the organization afloat.

The DGP said that during the basic training it has been our endeavour to ingrain the required level of professionalism in the recruits making them confident to take correct and effective decision while dealing the situations in the field. He said that people of the State have great expectations from the men in khaki and service of the society should be our priority.

On the occasion, the Principal  Ashok Sharma gave an oath to 774 recruit constables, who took a solemn pledge to serve the nation and presented a colourful march past. The trainees have undergone basic training course, besides they have been imparted training in different fields of policing like technical, commando, crowd control, disaster management, fire fighting, use of latest techniques in communication, map reading and human rights protection. While imparting trainings professional needs of police force in the present times have been kept in mind, DGP added.

Khoda disclosed that PTS Kathua has so far trained more than 22,173 jawans of JKP since its establishment in1998, besides imparting training to Railway Protection Force in different fields of policing. Among the pass outs 96 are post graduates, 53 graduates with professional qualifications and 448 graduates belonging to various districts of the state. He appreciated the efforts of the principal and his staff, which have made the school to proceed towards its achievements.

Earlier in his welcome address, Principal of the training school apprised the DGP about the training and developmental activities of the institution. He said that the pass out during their basic training have been exposed to various training modules targeting the professional needs of the force. In order to inculcate a broader vision in them special guest lectures on various topics of policing were delivered to the trainees by eminent and experienced officers. The trainees also performed field duties and participated in zonal sports meet held at , he said.

Constable Imtiyaz Ahmad Mir, who was declared all round best in the training, was granted out of turn promotion and decorated with the rank of Sgct by DGP on the spot. Constables Humayun Hussain, Jasbir Singh, Mohammad Javed, Bilal Ahmad, Jasbir Singh, Arundeep Singh and Tasaduq Ahmad were also honoured with commendation certificates and cash rewards for their good performance during the training.

Later, the DGP commissioned the upper storey of barrack block which has been raised by Police Construction Division (PCD) to suffice the residential facilities for the trainees and the staff. An advanced weapon simulator system (IFATS) installed in the institution was also commissioned by the DGP. The system would provide facilities to train the police personnel in using latest fire arms. He inspected the construction works under execution at Kathua and on his way to commissioned the administrative block constructed by PCD at District Police Lines, Samba.