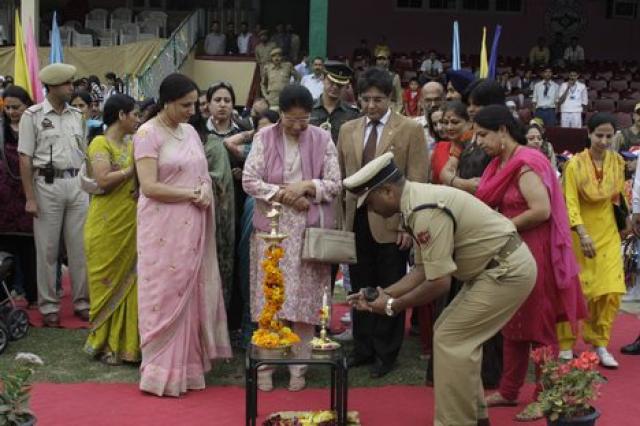 Arrangements for day-long Police Public Mela, to be held on
February 13 at Police Sports Stadium, were given final touch at a high level
meeting of senior police officers chaired by Director General of Police (DGP),
Kuldeep Khoda. DGP disclosed that more than 40 stall holders of different
police establishments, representing all the regions viz Jammu, Kashmir and
Ladakh of State are reaching to setup their stalls in the mega event. He
disclosed that Police Organization has decided to enhance the number of prizes
for this event up to 4480 which include 4 Ford Figo Cars, 4 Hyundai Santro
Cars, 4 Hero Honda Motorcycles beside other attractive prizes.

Khoda also said that besides these prizes, department has
decided to introduce new scheme of Special Bumper Prize (family package) for first
time, consisting package of 11 prizes which include Tata Nano Car, Laptop,
Washing Machine, Refrigerator, Sony Handy Camera and other attractive items in
the raffle draw for the public, who wait eagerly for the event. Meeting also
apprised DGP and other members of the executive body about the arrangements
made for establishing stalls to display their goods for sale to the public on
reasonable rates, space fixed  for each
stall, boarding and lodging facilities to the stall holders who will come here
from various police welfare centres, conduct of transparent raffle draw,
traffic, security, availability of drinking water, electricity, sanitation in
and around the venue, parking of vehicles, deployment of personnel and other arrangements.

Khoda stressed upon the organizers to ensure availability of
raffle draw tickets at prominent places in Srinagar and Jammu and also setting
up of special counters outside the venue for the convenience of general public
on the Mela day up to 2 p.m. He asked the officers to work in perfect
coordination to make the event a grand success. DGP disclosed that inauguration
of the Mela will take place at 10 a.m. and fabulous raffle draw will be held at
4 p.m. in presence of public and prizes handed over to prize winner’s
on-the-spot on the production of original tickets. Inspector General of Police
(Armed), Ravinder Kotwal, who is also Chairman of Mela Arrangements Committee,
briefed the meeting about the arrangements made for the mega event. Sohan Lal
Kaul, Commandant, IRP 3rd Batallion has been nominated as Nodel Officer for the
Mela.