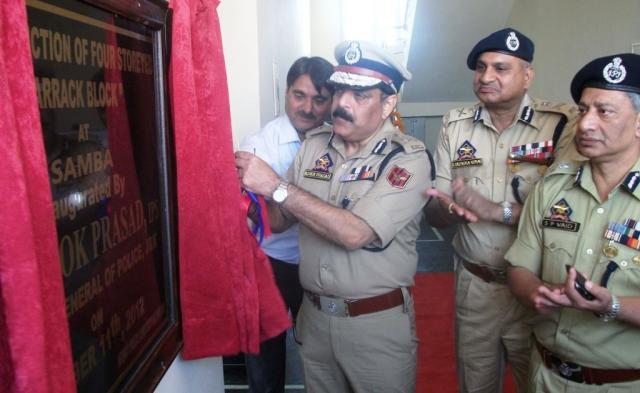 Prasad was visiting district Samba and Kathua in Jammu Division today to commission mmodation at Changrahan and Nud in the twin districts. The works have been executed by Jammu and Kashmir Police Housing Corporation (PHC) and Police Construction Division (PCD) under the modernisation, alternate accommodation programme of the Organization.

Commissioning the buildings,  Prasad said that the works have been carried out to enhance building infrastructure, and to provide better living facilities to the personnel. He said that under the scheme various construction works were taken in hand in every district of the State. Special focus is being paid to meet the latest requirements of jawans and officers working in different areas of the State, said the DGP.

DGP stressed upon the officers and engineers, who were accompanying him along with the Additional Directors General of Police,  K. Rajendaa Kumar, Dr. Ram Lubhaya and  S. P. Vaid, Managing Director, Police Housing Corporation,  Alok Puri that they should ensure utilization of quality material in the construction of residential and office complexes. He appreciated the work of Police Housing Corporation and engineers of Police Construction Division for completing the works in the record period of time. He also asked them to complete the other ongoing works which could suffice the living facilities for the personnel working in these areas.

The ADGP (Headquarters),  S. P. Vaid and Managing Director (PHC),  Alok Puri apprised the DGP about the construction activities in the Division. They said that hostel blocks at Nud have been completed by Police Construction Division at a cost of Rs. 2.10 crores and are having mess-cum dinning hall, besides other facilities for the inmates. Battalion headquarter consisting of administrative block, stores building, quarter guard and accommodation for officers has been executed by Police Housing Corporation at a cost of Rs. 2.70 crores, they added.

During the inspection of other under execution works in the districts of Samba, Kathua and , the DGP discussed the drawing and other related issues with the engineers of PHC and PCD. Executive Engineers,  N. D. Khawaja and  Nissar Ahmad briefed the DGP about the progress made on the construction of other works in these districts. They assured that the construction works would be completed within the stipulated period and handed over to the concerned units for utilization.

Earlier, the DGP handed over a 24 Seater Mini Bus to Jammu Bar Association at an impressive function held at High Court Complex Jammu. The Bus has been procured by JKP for ferrying poor and aged witnesses, litigants from main road to Court Complex. On the occasion the DGP said that JKP has procured the Bus under its Civic Action Programme and it is endeavour of the Organization to help the poor and needy people through the popular programme. He expressed hope that it would prove beneficial for the needy people who have to visit Court Complex as witnesses and litigants. President Jammu Bar Association,  B. S. Salathia extended his thanks and gratitude to the DGP for extending their help to the poor and needy people.