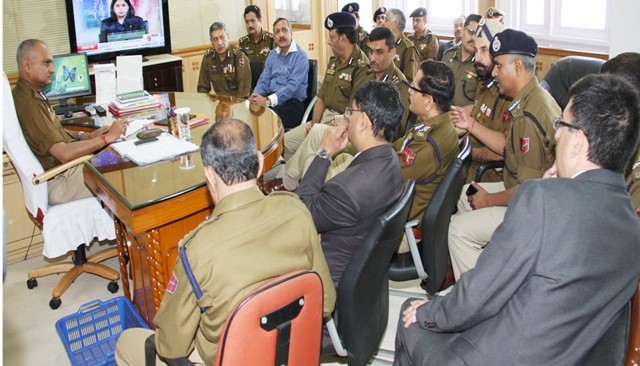 Jammu, November 10, (Scoop News)-Director General of Police (DGP), K. Rajendra Kumar was presented a guard of honour at Police Headquarters (PHQ), which re-opened here this morning, following the darbar move.
On his arrival, Rajendra was received at PHQ lawns by senior police officers including Additional Directors General of Police, S. P. Vaid and S. M. Sahai. The DGP visited various sections of PHQ and enquired from the officials about the working of their respective branches.
Expressing his satisfaction over the advance arrangements made for smooth re-opening of PHQ, the DGP stressed for more dedication to bring more efficiency in day-to-day working. He said that the matters related to the public interest should be disposed on merits without wasting any time. He said that efficiency in working would strengthen the subordinate units to work for the betterment of the public.
The DGP appreciated PHQ staff for ensuring the working of PHQ before the scheduled date in view of the forthcoming Assembly Elections in the State. He said that the staff members, ignoring their personal comforts, continued their working during transit days and ensured required preparations for the elections.
Rajendra also visited other moving police establishments in winter capital including Security, CID, Traffic and Crime Headquarters and interacted with the officers of these wings. He stressed upon the officers to render their duties with zeal and dedication and create coordination to ensure smooth conduct of elections. During the visit of various establishments, he discussed different administrative and other matters related to upcoming elections. He gave on spot instructions for creating better working environment in their respective wings.
Later, the DGP chaired a meeting of senior police officers at PHQ and discussed various issues related to the administrative matters and professional policing. The officers present in the meeting briefed the DGP about the progress achieved on different fronts of professional policing and efforts put in place for maintaining the law and order and create conducive atmosphere during polls in the State.