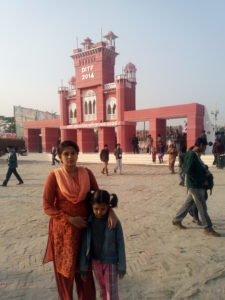 The first day of Dhaka International Trade Fair was pretty ordinary one. Previous years in the same event the first day of the DITF was almost houseful. Many shops are still under construction and some shops are complete but still to be launched. The ATM booths are available from almost all local banks but the service is still not active for the first day. The bank authority said that their service will be available within one or two days.

The ticket price is reasonable, although it is higher than previous years. For adults, it costs 30 Taka per person, and 20 Taka for child aged less than 3 years. There is no queue today for buying tickets, almost all counters were empty, until 4 pm local time. After that, the fair came alive as today is public holiday and there is no strike today as well.

The fair should have started on the first of January, as it happens each and every year as a tradition, but this year the National polls came on the way, so the Trade department took the decision to start the fair from January 15th, today. Moreover, the recent political situation also may affect the visitors to come to the trade fair, assumed by many people around the country.

National and International stalls are available in DITF. Normally this fair runs for a month, but this year’s DITF will only held for 15 days, till 31 of January.