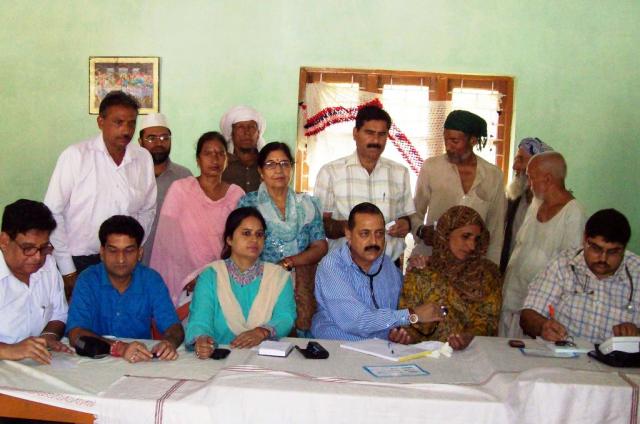 Jammu, October 18 (Scoop News)- “With the prevalence of Diabetes rising to over 15 percent in Jammu & Kashmir, the major health challenge in the next few years will be increasing incidence of Diabetes in youngsters including adolescents and teenagers”. This was stated here today by renowned Diabetologist, National Professor of Diabetes and noted author Dr. Jitendra Singh while addressing a Diabetes Awareness cum Detection programme held today  at “Kusht Ashram” (Leprosy Home), Bhagwati Nagar. This was probably the first of its kind Diabetes programme to be held at Leprosy Home here and was organized by Diabetes Care Foundation (DCF) in collaboration with Shaheed Kuldeep Verma Memorial Committee led by Committee General Secretary Shilpi Verma.

Dr. Jitendra Singh said that often the health services do not adequately reach leprosy affected sections of society and even the medical professionals attending on them focus primarily on leprosy without realizing that these people could also be victims of modern day non-communicable diseases like Diabetes and hypertension. During the camp over 150 leprosy individuals received counselling for Diabetes and there were about 10 new detections of diabetes patients.

Holding lifestyle changes as mainly responsible for rapid spread of Diabetes, Dr. Jitendra Singh made a startling disclosure that a survey conducted during morning hours across various school bus stops in and around city has revealed that a majority of school going urban children are either obese or overweight. The rising trend of weight gain coupled with lack of physical exercise and high level of mental stress in school going children acts as a precursor of future diabetes in them at a younger age particularly in those children who also have a family history of diabetes, he added.

Dr. Jitendra Singh  also referred to the economic burden of Diabetes involving the cost of lifelong management of diabetes and its complications which is going to be an additional liability for the society and the nation.

On the occasion, Rajeev Sharma and his team conducted blood tests. Free medicines was also distributed.