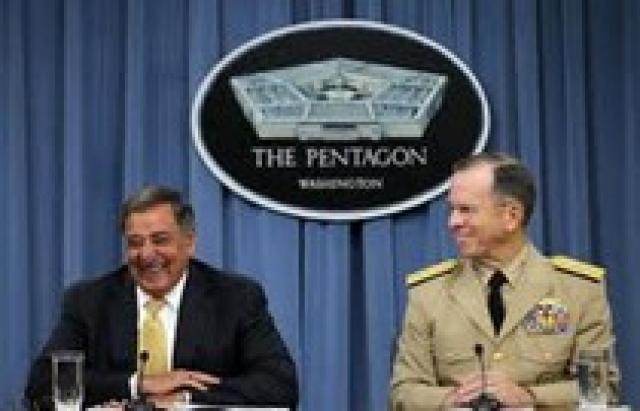 In testimony before the House Armed Services Committee on April 19, 2012 Secretary of Defense Leon Panetta repeatedly misrepresented the truth about the situation in Syria and American military involvement with the rebel movement in that country.

The most blatant lie he told members of the committee:

This is a lie because the US military has been secretly training, equipping Libyan mercenaries to fight in Syria for a long time now (See article: US helping to train and arm Islamic mercenaries to fight in Syria http://www.examiner.com/article/us-helping-to-train-and-arm-islamic-mercenaries-to-fight-syria and  http://www.examiner.com/article/us-backed-terrorists-syria-behead-murder-and-kill-police

The same firm earlier operated extensively in Libya and is believed to be financed by the Department of Defense, using taxpayer funds (see: WikiLeaked: Ex-Blackwater ‘helps regime change’ in Syria  http://rt.com/news/stratfor-syria-regime-change-063/

US MERCENARIES IN SYRIA

REGIME CHANGE IN SYRIA PLANNED IN ADVANCE BY THE PENTAGON

In an interview with Amy Goodman on March 2, 2007, U.S. General Wesley Clark (Ret.), explains that the Bush Administration planned to take out 7 countries in 5 years: Iraq, Syria, Lebanon, Lybia, Somalia, Sudan, Iran. He also mentions a Pentagon Memo he saw indicating the Pentagon is behind the effort of regime change in Syria (see: Gen Wesley Clark Reveals US Plan To Invade Iraq, Syria, Lebanon, Lybia, Somalia, Sudan, And Iran http://www.youtube.com/watch?v=9LTdx1nPu3k

US COVERTLY ARMING THE REBELS

The Secretary of Defense also mislead the committe when he said: “we are strengthening and unifying the non-violent political opposition in Syria.” In fact the US military is covertly arming the rebels with sophisticated weapons including anti aircraft missiles. According to one news report a general in the opposition militia known as the Free Syria Army has told journalists in restive Homs province in central Syria that the rebels have received French and American military assistance.

The unnamed general appeared on camera and told a journalist from Reuters that "French and American assistance has reached us and is with us." When asked to elaborate on the nature of the assistance he added, "We now have weapons and anti-aircraft missiles and, God willing, with all of that we will defeat ( President) Bashar (al-Assad)."

SEE VIDEO EVIDENCE OF THE INTERVIEW WITH SYRIAN GENERAL

See article, which include video footage of Syrian rebel boasting of having weapons provided by the United States: Syria: Are USA and France Arming Rebel Forces? http://news.linktv.org/videos/syria-are-usa-and-france-arming-rebel-forces

CAN THERE BE ANY DOUBT LEFT?

In yet another video, US manufactured M-16 rifles are clearly seen in a house captured by Syrian security forces (see: Syrian Rebels Captured With Israeli Weapons http://www.youtube.com/watch?v=qgznlLHb-44&feature=related ).

It should be noted that the US is the largest arms provider to Israel and the bulk of the weapons and ordinance seen were in fact made in the United States. Suggesting that these weapons were smuggled into the country by the armed terrorists.

For those interested in reading the comments made by Secretary of Defense Panetta before Congressional committee – reference: "Statement on Syria before the House Armed Services Committee" (As Delivered by Secretary of Defense Leon E. Panetta, Washington D.C., Thursday, April 19, 2012) http://www.defense.gov/speeches/speech.aspx?speechid=1663

It should be noted that evidence was offered to the Chairman of the House Armed Services Committee regarding important mis-statements by the Secretary of Defense – the spokesperson for the Chairman rejected the idea that the Secretary had mislead members of the committee and refused the opportunity for evidence in this case.

When asked if Congress would investigate this matter the spokesperson said that was “not going to happen”.

Filed under: Opinion, US
Share Tweet Pin G Plus Email
previous article: Could Syrian chemical weapons fall into the hands of al-Qaeda?
next article: Iran blames the US for a 40-fold increase in drug trafficking in Afghanistan