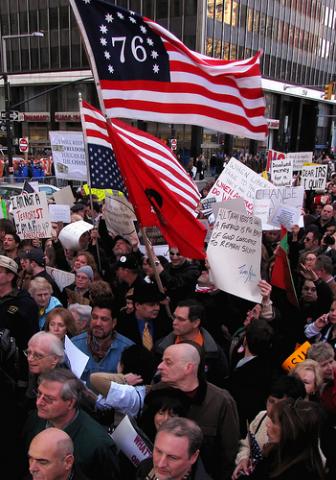 Did you realize there were at least 2,000 Tea Party Rallies held on the Fourth of July?  I’ll bet you didn’t, unless you are on a mailing list for Tea Parties or the 9/12 Groups.  Not unless you regularly receive emails from some conservative organizations.

Don’t you find it odd that the mainstream media chose to ignore these rallies?  If there were 2,000 rallies about anything else, or being held by liberal groups instead of conservative ones, don’t you think they would be covered or at least mentioned?

Was Michael Jackson really that much more important than 2,000 rallies being held because there are people who are upset with the government?

WorldNetDaily ran a poll about why people thought the media ignored these rallies.

They’re driven by ideology and are completely in the tank for Obama and the Congress.

They’re hoping the tea party movement will die if they ignore it.

They’re so out of touch with mainstream Americans, they can’t recognize the intense interest.

They simply forgot the central role of a free press is to be a watchdog on government.

There were other answers as well:

They operate under this paradigm: "If we don’t report it, it must not be important."

They’re egomaniacal clowns who don’t even realize what news is anymore.

They were too busy covering Michael Jackson and Sarah Palin.

What do you think?  Why was there no national covereage of 2,000 Tea Party Rallies on July 4th?

Joseph Farah, of WorldNetDaily wrote that in his lifetime he has never known a time when hundreds of thousands of Americans put aside holiday plans to attend rallies like this.  And yet, there was no coveage.

So the Independence Day tea party was an extraordinary event to begin with. Everyone knew there would be about 2,000 rallies around the country – that we could count. There were probably far more. Everyone knew that these demonstrations would attract between 50 people at the low end and 5,000 to 10,000 at the high end. The times were set. The date was set – a predictably slow news day on a holiday weekend.

Yet, to my utter amazement, having been in the news business for more than 30 years, not one news organization – broadcast, print or Internet – bothered to put together what we call a "roundup" of these local stories to give the events some national context.

Not even the Associated Press, the largest news-gathering organization in the world, one paid specifically by newspapers to perform this function, given that it is a non-profit cooperative of the newspaper industry and therefore having rights to all the copy produced by its members, bothered to put together a roundup story – even as late as 24 hours after all the tea parties were finished.

Here’s the link to read his whole article: The Tea Party Coverage That Wasn’t

He ends with these words:

Maybe my colleagues have just forgotten how to report – how to do their jobs. Maybe they’ve just become incredibly lazy. I guess these are possibilities. But I don’t believe it for a minute. I am more convinced than ever that 99 percent of journalists in what Rush Limbaugh has coined the "state-run media" are indeed serving their masters.

More likely they have forgotten what their job is – to serve as a watchdog on government and other powerful institutions.

Again, I ask, why do you think these rallies were ignored by the mainsteam media?

And, knowing that they were ignored, can you now understand why conservatives insist that mainstream media is strictly a liberal news source?

Here’s an article that lists some of the Tea Party rally events and attendance numbers.  It looks like the least in attendance anywhere was 300 and the most about 5,000.  Those are pretty good numbers for a day when most people were worried about whether or not they had enough hamburgers to grill and whether or not they’ll get close enough to the fireworks display to see it.  It’s likely that many of the Tea Party rally attendees went to church first, then to the rally, and finally out to grill burgers.  This was important to them.  Too bad it wasn’t important enough for media coverage.