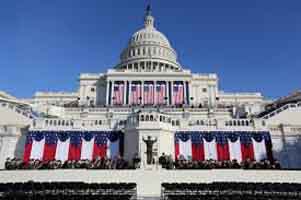 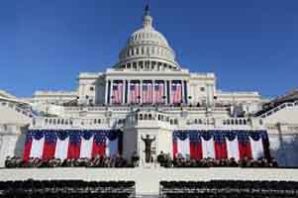 As a woman, mother, immigrant, and deep lover of this country, I was unbelievably honored and proud to be at the Capitol to witness the inauguration of the 45th president of the United States.  Trump was my candidate, but that’s not what brought me to this great district.  I was there to accompany my 15-year-old daughter to D.C. for a high school leadership inauguration summit that she was selected to attend.  My husband and 13-year-old son came too, and we were lucky enough to acquire Inauguration tickets from our local Democratic congresswoman.

I was a little concerned for our safety.  (Unless you’ve been living under a rock, you know how divided our country has been over this recent election.)  But, while in the cab on the way to the Capitol building I couldn’t help but notice the high level of security: military vehicles/personal on every block; police and other government officers lining the streets; concrete barricades; buses and trucks blocking the roads.  And when we got to the Blue Ticket entrance our bags were checked, we entered through metal detectors, and we were even patted down.  I felt like I was in the safest place in the world.

The atmosphere was electric.  Muddling through the crowd to find our spots on the lawn, the other witnesses were pleasant, friendly.  It was like one big party.  Having my son with me, I encouraged him to get closer and closer to the big screen so he could watch the big show.  I followed him.  No one complained that we were cutting to find a better spot, and everyone was very accommodating.  Frankly, I was a little shocked by that.  Even the young mom he stepped in front of to secure his viewing spot just smiled.  Of course, there’s that one idiot that convinced his girlfriend it would be a good idea to climb the nearby tree for a better view of the festivities.  But, feeling the pressure from the group they came down almost immediately.

The ceremony that followed exceeded my expectations.  There were a lot of cheers and jeers, in the obvious places.  History was made, and I was there!  I could not have been more proud to be an American.  Getting out of the venue was as easy as getting in.  People walking together, same hopes and dreams of the next administration.

The next day was the Women’s March.  I saw on social media that a lot of my friends would be marching all over the country for women’s rights.  Good for them.  Obviously, as a woman, a mom, and especially a mom of a teenage daughter, I’m a proponent of women’s rights.  But, if I’m going to be honest, I’m not really the marching type, especially when I’m in D.C. for the first time in 20 years with my family and there are sights to be seen.  But hey, to each their own.  That’s the beauty of THIS country – the freedom of expression.

The Natural History Museum was on my son’s bucket list for Saturday, and I had to come through for him.  So, we (we had a couple hometown friends with us) grabbed an Uber and were on our way from Arlington National Cemetery.  Because of the barricades, the closest our driver could get us to the museum was the corner of 17th Street and Constitution Ave., across from the White House – smack dab in the middle of the March!  We really hoped to avoid it, but a mom’s gotta do what a mom’s gotta do.  So, we got out of the car.

I’m game for almost anything.  This was fun for me.  This would definitely go down in history as one of those “where were you when” moments – just like the Inauguration.

There was a sea of women.  Lots of them even brought their kids and husbands.  A huge percentage of the crowd wore pink knitted cat-eared beanies.  I didn’t know what that meant, but oh well.  My husband even took a picture with a group of ladies, them wearing their homemade beanies, he wearing his Reagan baseball cap.  It all seemed light hearted…until we started making our way down Constitution Avenue towards the Smithsonian.  That’s when I started to notice all the vulgar posters: posters with the “P” word, posters with penis’, posters with vaginas, posters with uterus’.  THIS was not a place for children, and my own son was with me.  I was embarrassed, mortified, disappointed and in disbelief.  Now I understood what those pink beanies represented.  Now I understood that this was, in part, a Trump protest.

Getting down to the museum became challenging.  There were so many people.  At one point my friend was shoved and told to get out of the way.  Was this because he was a man?  When we finally got to the Smithsonian there was a dad with his two young boys behind us in line who was equally dismayed.  Like us, he had planned this trip a year ago and was saddened by what he just witnessed.  By the time we got to the front of the line a huge pile of posters had accumulated from visitors told they could not bring them in.  Yet when we exited, the pile was even bigger.  The first sign of ALL the trash that would be left behind.  Gross.

I’m not a prude.  I’m not easily offended.  But, that day I was disgusted.  Disgusted by some of the hypocrisy around me.  Yes, I’m conservative; yes, I’m registered Republican; yes, I voted for Trump.  Yes, I believe in HUMAN RIGHTS: men, women, children; straight, gay; black, brown, white.  Be who you are.  But don’t be offended by Trump’s use of the “P” word then march around our Capitol with that word plastered all over your poster.  Please don’t disguise your anti-Trump sentiments by pretending you’re marching for women’s rights.  Please do not say or teach your children to say, “Trump is not my President” when in fact he IS the president of the United States, therefore he IS your president.  If you want to be treated with respect, act like it.  And when you complain about your rights as women in America, please consider our sisters in the Middle East.  Malala spoke to the students at my daughter’s conference only three days prior – be inspired by that.  Stop complaining about what you don’t have.  Be blessed by what you do have.  Share those blessings with everyone around the world.

Of course, I’m NOT generalizing this to everyone that attended the March on Saturday.  There were many people there that handled themselves with dignity.  If my own daughter wanted to march, I might have marched with her.

There are many different ways to make our point, share our thoughts and achieve our goals while maintaining a high level of character and grace.  Let’s remember to respect each other, and above all, ourselves.  After all, WE are ONE nation under GOD.

Rowena is a stay-at-home mom who is dedicated to raising her two children and serving her community through philanthropy. When she’s not driving the kids around to all their activities, she spends her time volunteering at school, raising money for Rady Children’s Hospital, and working for local non-profits through the National Charity League. When she’s not trying to save the world, she enjoys traveling, eating out, watching movies, attending concerts and finding peace at the spa.  She and her family recently wrote and published a book, My Dad Is An Alcoholic: A Pre-Teen Guide To Conquering Addictive Genes.  Learn more at www.potatoallergy.com