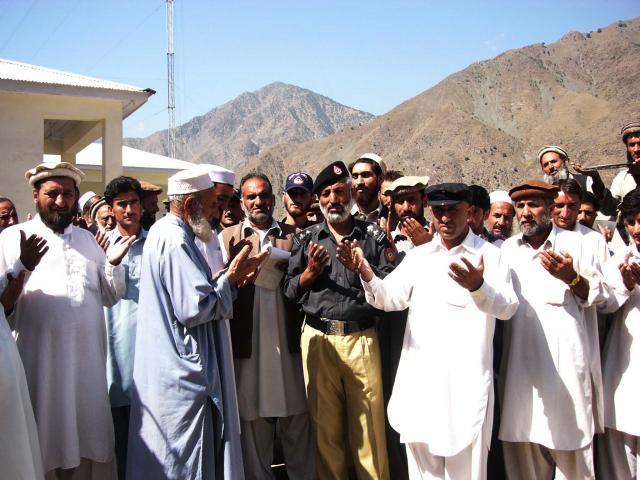 CHITRAL: Digital telephone exchange launched at Arandu village situated on Pak Afghan border area some 95 KM from here. Tehsil Nazim Chitral Sartaj Ahmad Khan was chief guest on the occasion who inaugurated telephone exchange by cutting the ribbon. A simple but prompt function was also held here on this occasion.

Addressing to the opening ceremony of digital telephone exchange Sartaj Ahmad Khan said that this is not an opening of telephone exchange but it will open doors of all developmental projects in this backward and border area. He said that Arandu is a very important and sensitive area consisting on some 25000 populations situated on the border of Afghanistan and Pakistan but there was no Bank, no developmental project in the area due to non availability of telephone facility.

He said that after launching the telephone exchange so many branches of different commercial banks would be open here, which will play a vital role in development of this backward and remote area. He said that Arandu is a gateway by virtues of trade and development to Chitral. He said that barren lands of the area would be converted in dry port for transaction and trade with Afghanistan.  He said that after providing of telephone facility the entire population would be facilitated from information technology and Internet especially the students would fully utilize Internet facility for their future plan and to know about the world, which will be deemed as a global village. . Haji Sher Muhammad Nazim Union Council Arandu also spoke on the occasion.

He thanked Tehsil Nazim for his efforts for kicking this exchange. He said that the entire population were totally deprived from telephone and any other mobile network facility and that is why people of Arandu used to go to devastated and ruined Afghanistan territory for contacting their relatives or giving them emergency message by telephone or mobile network working in that areas.

He expressed his great sorrow that people of this Nuclear power country were deprived from telephone access, though the same is available in Afghanistan area, which was ruined for the last 30 years. SDO Pakistan Telecommunication Company Bakht Baidar also spoke on the occasion. He assured that nothing would be charged from those subscribers whose telephone connections were remained disconnected for 6 months.

A large number of people belonging to all walks of life were present on the occasion that exchanging felicitation words among themselves on launching of telephone because this is the first telephone facility after creation of Pakistan.  It is worth to mention here that building of telephone exchange was completed here very soon but due to no electricity in the entire area telephone exchange could not working. Hence presently the exchange will work with diesel generator for 8 hours until supply of electricity in the area.

Poor progress of Sheshi Hydro Power project.   CHITRAL:  Tehsil Nazim Sartaj Ahmad Khan visited under construction Sheshi Hydro power project and expressed his great concern over the poor performance of contractor and lack of monitoring by Sarhad Hydro Development Organization (SHYDO). Talking to APP he said that construction work on this project has been started one year ago from Lawari tunnel which was completed in stipulated period of time by foreigners but this power house is still under construction. He also anger over the damaged portion of power house which was cracked before starting its work. He directed the concerned staff and contractor to expedite work on the ongoing project and giving them deadline of two weeks for completion of work. He said that on one hand people of the entire area are badly suffering from longest load shedding while on the other hand this hydro power house is still incomplete despite lapsing of more than one year of its stipulated period. It is worth to mention here that SHDD is under construction by SHYDO for the last 4 years which will generate 1.8 mega watt electricity but the project was extra ordinary late and  could not complete timely. G.H. Farooqi PO Box No. 50 GPO Chitral Pakistan Phone No. 03025989602,0943-302295,414418 Email: gulhamad@gmail.com