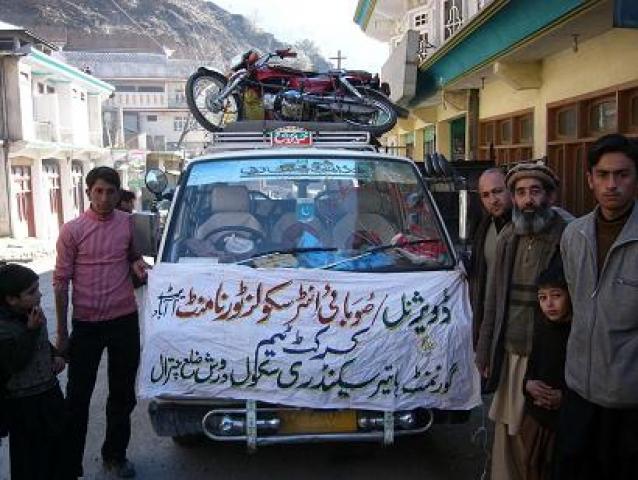 CHITRAL:  Services of National Highway Authority was highly appreciated by people of Chitral for opening Lawari tunnel for passengers. As NHA allow passengers to travel inside the tunnel from 12 PM from Chitral side and opening the tunnel from Dir side after ending of all vehicles at 1. PM. They allow not only passengers but also heavy trucks for transportation and  to carry edible things and essential commodities to Chitral. While in past people of Chitral were traveling via Kunar Afghanistan wasting more time and money or crossing snow bound Lawari top by feet as a result thousands of people have been died in this ill fate practices. After excavation of Lawari tunnel a movement was kicked by a PPP leader and Wing Commander retired Fardad Ali Shah to convert it from  Rail to Road tunnel and to allow Chitrali passengers to cross the tunnel in winter season when their only land route connecting Chitral to other sorts of the country  remain block due to heavy snowfall at Lawari pass having the altitude of 10500 feet from sea level. Federal Minister for Communication Dr. Arbab Alamgir Khalil principally decided to convert it in road tunnel and also directed high ups of NHA to allow Chitrali passengers inside the tunnel at least for 2 hours a day. As a result they allow passengers vehicle to cross the tunnel as well as heavy trucks also carrying edible things and essential items to Chitral as a result people of Chitral not facing acute shortage of these items. Abdul Nasir president legal aid Forum for human rights highly appreciated this beneficial step by NHA and thanked Dr Arbab Alamgir Federal Minister for Communication for converting Lawari rail tunnel to road tunnel and allowing Chitrali passengers inside the tunnel who saved them from the mouth of death because in past people of Chitral crossing Lawari top by feet as a result they plunge into deep ravine and heavy glaciers and their dead bodies were recovering after melting of snow.  They also highly hailed services of Dir police especially Dir Ladies police who comforting Chitral passengers and help them. Dir police very politely perform their duty very honestly and politely while searching body and luggage of people to save from any untoward situation in the tunnel.  As a result District Police Officer Ajaz Ahmad also announced cash prize of rupees 500 for each lady police constable serving at Lawari top on recommendation of G.H. Farooqi senior journalist and Director Human Rights. DPO Dir Ajaz Ahmad while talking to this scribe requested all passengers to must carry their national identity cards so as to save them from any terrorist incidence.

Chitral once again in grip of sever cold weather.

CHITRAL: After snowfall on the peaks of mountains at Chitral  a week ago and cold wind blowing in the valley and Chitral once again in grip of severs cold weather. Hence people feeling great pleasure on opening of Lawari tunnel. While in upper Chitral people facing great problems due to shortage of firewood and fresh vegetable. According to Meteorological department at Chitral temperature was recorded -9 (minus nine below freezing point) on Friday, which is the lowest temperature in this season. People besieged inside their houses and warming their bodies by burning firewood. Besides it in Kalash valleys and upper Chitral people living inside their houses and using dry food which have been stocked in summer season. Links road have been blocked due to snowfall at so many valleys of Chitral and downtrodden people of these inhabitants facing numerous problems.