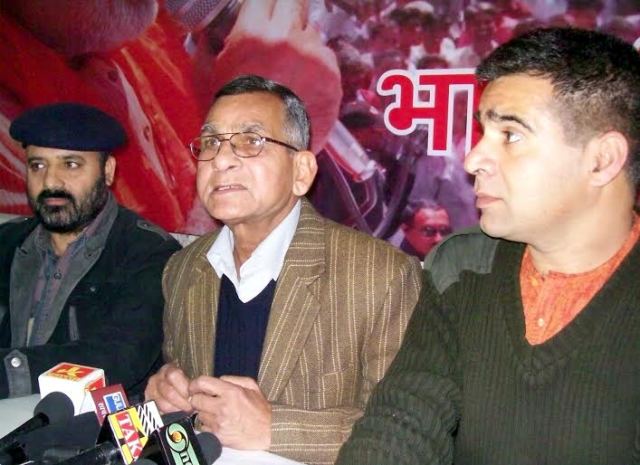 Jammu, January 17, (Scoop News)-Urging State Governor N.N. Vohra to discharge his constitutional obligations towards the nation by invoking section 92 of the State Constitution to dismiss the NC-led coalition government without losing a single moment, State General Secretary Bali Bhagat and Prof Hari Om, Political Advisor to State BJP President Jugal Kishore Sharma, on Friday said that the NC has crossed all the limits by demanding “independence status for Kashmir”. “The NC has become a threat to national security and its continuation in the highest executive office even for a moment would prove detrimental to the paramount national interests and interests of the people of the state. It wants to restore in Kashmir a situation as it existed there before 1420 A.D. The NC has all through communalized the polity and society in Kashmir to promote its selfish interests. It has consistently abused the Indian Constitution and Indian institutions like Army, Election Commission, Comptroller and Auditor-General and Supreme Court to arouse anti-India passions in the Valley. Till the other day, its demand was greater autonomy, bordering on virtual sovereignty, but on Wednesday the NC revolted against India by demanding independent status for Kashmir,” said Bali Bhagat and Prof Hari Om while interacting with reporters at the party headquarters.
The alarmed and outraged BJP leaders demanded immediate intervention of State Governor as the situation in the state has gone out of hand while reacting to NC General Secretary Sheikh Nazir Ahmed’s January 15 Srinagar statement that the NC favoured independent country status for Kashmir and that it was “Sultan Shahabuddin who had consolidated Kashmir’s independence paving the way for Budshah to make it a welfare state”. NC General Secretary made these anti-national statements while addressing party workers in Srinagar, the BJP leaders said, and added that by making such nasty statement the NC has exposed itself and its pro-separatist credentials. “The BJP has defeated the pro-autonomy, pro-independence and pro-self-rule elements in the past and it will fight out the anti-national forces in the Valley with full force at its command to isolate and defeat them in the future as well. There should be no doubt it. The BJP stands for national unity, democratic and all-embracing polity and a system of governance in the state that brings Jammu & Kashmir closer of New Delhi then ever before. The BJP will not allow NC or any other outfit to even tinker slightly with Indian sovereignty and defeat their attempts to turn the needles of the clock back by six centuries,” Bali Bhagat and Prof Hari Om declared.
The BJP leaders asked the State Governor to act and act very fast and said that any failure on his part to do so would only embolden further separatists in Kashmir. “This would not send a right signal”, they said, adding that the Congress should also make its stand clear on what Sheikh Nazir said. At the same time, the appealed to the people of the state to see through the nefarious game plan of the NC and make common cause with the BJP to defeat the secessionists.
BJYM State President Ravinder Raina was also present in the press conference.