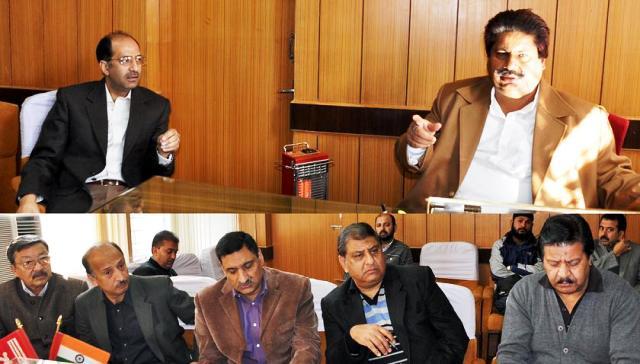 Jammu, January 31 (Scoop News) – Minister for Revenue, Relief and Rehabilitation,  Raman Bhalla todau said displaced families of Kashmir valley are faced to lot of difficulties during turmoil adding that coalition Government is making all out efforts to provide all basic as well as infrastructural facilities to them for their proper rehabilitation and safety.

The Minister asked the concerned authorities to submit a proposal of those entrepreneurs who want to restart their business activities in the valley along with a provision for unit shed so that the package proposal could be submitted to central Government for compensation.

The Minister said Government is committed to provide accommodation to the Kashmiri pandit migrant employees and to fulfill the commitment,   quarters have been developed  at Vessu, Mattan, Sheikhpora in Budgam, Hall in Shopian and Baramulla, adding that more such quarters would come up for which land has already been identified across the Valley. At Vessu and Mattan, about 200 quarters are underway over 100 kanals of land and the shared accommodation would be provided to the candidates to be posted in Anantnag and Kulgam districts.

President KMEA projected the problems of the entrepreneurs including outstanding loans other than interest accrued since 1990 onwards. He stressed the  need  to   reschedule the interests  and repayment adding that this shall be worked out for next 10-15 years. He also demanded  compensation for re-construction of damaged properties and sheds due to weather conditions, security forces or by subversive activities, soft loan for revival of industrial units for which Government has to provide guarantee as has been done in some cases in Jammu, renewal of lease deeds for industrial plots/sheds which have expired without charging extra units, reeducation  in the margin money to 5% of the loan   and allotment of land to entrepreneurs in newly developed industrial estates.

Bhalla gave patient hearing and assured them these would be looked into on priority basis and said the issues would be taken up with Finance and Industries departments for working out a proposal.

The Minister informed that the upcoming 4218 flats at Jagti township in for the migrants, costing Rs. 335 crore is nearing completion. He said instructions were issued to executing agency to complete the ongoing development works of parks, pre-mixing of internal link roads flats, 40-bedded hospital, two multipurpose community halls, shopping complex, one Higher Secondary and one Middle School, play field besides approach roads within stipulated time frame so that the allotment would be made available to displaced families by March 15 this year. He said that for creating laboratory, library, furniture and other infrastructural facilities in the schools, an amount of Rs.50 lakh has been given to Director School Education.

For construction of auditorium in the colony, the Minister said the Government has earmarked Rs. 1 crore besides Rs. 1.5 crore for establishment of old age home with capacity of 50 persons.

Speaking on the occasion, Nasir Aslam Wani said Government is committed to provide all infrastructural facilities to displaced migrant families of the Kashmir Valley adding that the Government will leave no stone unturned to provide proper accommodation and security to the migrant Kashmiri Pandit employees in the valley so that they could play a vital role in ensuring return of entire community.

The Minister said Government has identified a land at Bongund near Verinag for construction of more quarters for the Kashmiri Pandit migrant employees  . He said Omar Abdullah led coalition Government was the first  to take  concrete step   for the rehabilitation   Pandits since their displacement,  adding that the Government was working in right direction and had a clear vision policy for building a secular and democratic social structure in the state.

President KMEA appreciated the positive role of Revenue, Relief and Rehabilitation Minister, Raman Bhalla, in getting the employment package implemented in letter and spirit.