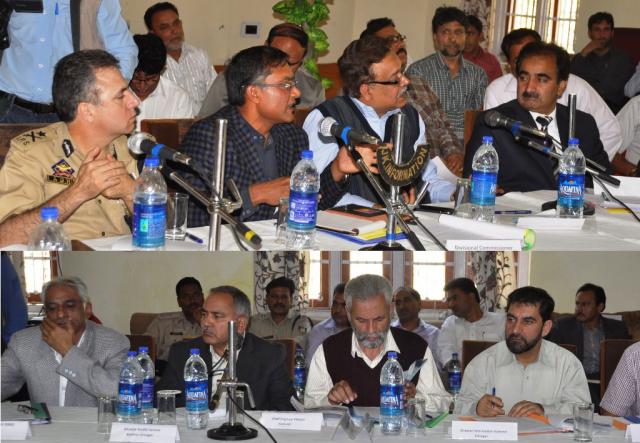 Srinagar, May 31 (Scoop News) –Urging officers to adhere to the timeline for the conduct of smooth and successful Amarnathji Yatra this year,  the Divisional Commissioner, Kashmir,  Shalender Kumar today directed the concerned officers to expedite the clearance of routes via Pahalgam-Chandanwari, Chandanwari-Sheshnag, Sheeshnag-Panjtarni and Panjtarnti to holy cave.

Kumar alongwith senior officers of divisional administration besides Chief Executive Officer, Shri Amarnathji Shrine Board undertook a day long tour to inspect the pilgrimage route and the camp stations via Pahalgam route. He directed to put effective refractory mechanism in place to ensure that only those yatries who possessed valid yatra permits were allowed to undertake the yatra on the date and by the route for which they have procured yatra permits. He also stressed upon the concerned officers for adequate facilities besides infrastructure and un-interrupted power and water supply, sanitation, medicare, Telecom facilities and transport facilities.

It was given out in the meeting that 100-mini buses and 450-Tata Sumos shall be put in the service for the transport facilities available to the yatries from Pahlalgam to Chandanwari.

District Development Commissioner, Anantnag, Dr. Farooq Ahmed Lone informed the meeting that adequate stocks of essentials including 950 quintals of rice, 800 quintals of aata, 450 quintals of sugar, 420 quintals of bran and 7000 cylinders of LPG besides 85800 litres of K. oil shall be made available to the yatries. He also gave out that 13 medical aid centres besides 6 emergency medical centres shall be established for the medicare facilities of the yatries.

Dr. Lone also informed that Municipal Committees of Qazigund, Anantnag, Pahalgam and Pahalgam Development Authority shall ensure sanitation at the halting stations as well as on the track upto holy cave. As many as 7 camp officers have been deployed who will function as Duty Magistrates within their territorial jurisdiction during the yatra period.

Chief Executive Officer, Shrine Board,  Navin Kumar Chowdhary exhorted upon the officers to maintain discipline and put in coordinated efforts for the conduct of smooth and incident free yatra.

The Divisional Commissioner on the occasion directed officers of CA&PD to submit daily stock position of essentials during the yatra period and also asked for expediting the registration of ponies and labourers. He also directed the officials of Metrological Department to announce weather forecast after every three hours and the weather alerts shall be communicated to the concerned officers instantly.